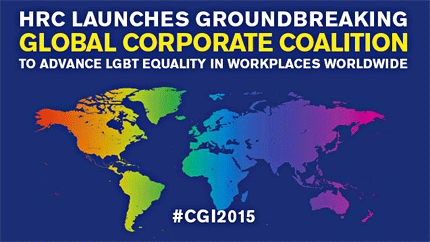 NEW YORK—The Human Rights Campaign (HRC), announced the creation of a groundbreaking global coalition committed to advancing LGBT workplace equality around the world. The announcement will be made on stage during the closing plenary of the 2015 Clinton Global Initiative (CGI) Annual Meeting in New York.

The inaugural members of HRC’s global corporate coalition collectively employ nearly 1.4 million people across more than 190 countries and have a combined annual revenue of nearly $550 billion. Together, they have committed to safeguarding workplace fairness and equality for LGBT employees across their global operations. [pullquote]”…Today, they are sending a resounding message that LGBT people are valued, they are equal, and they deserve a fair chance to earn a living and provide for their families no matter where they live.”—Chad Griffin, HRC President[/pullquote]

“We are proud to bring together some of the world’s largest companies to advance LGBT equality around the globe,” said HRC President Chad Griffin. “These corporate leaders, which employ 1.4 million employees worldwide, understand that equality, inclusion and engagement are pivotal to business success. Today, they are sending a resounding message that LGBT people are valued, they are equal, and they deserve a fair chance to earn a living and provide for their families no matter where they live.”

The business case for LGBT inclusion has strong momentum, spurred by U.S.-based multinationals across the Fortune 500, a majority of which afford explicit protections on the basis of sexual orientation (89%) and gender identity (66%). The trend toward LGBT-inclusive corporate policies is growing in the Americas, East Asia, Australia, and in Europe.

Yet the global landscape for the social and economic inclusion of the LGBT community remains a patchwork of extremes—from progressive countries leading on matters of equality, to nations implementing laws rolling back basic LGBT rights. [pullquote]The business case for LGBT inclusion has strong momentum, spurred by U.S.-based multinationals across the Fortune 500, a majority of which afford explicit protections on the basis of sexual orientation (89%) and gender identity (66%). The trend toward LGBT-inclusive corporate policies is growing in the Americas, East Asia, Australia, and in Europe.[/pullquote]

In addition to implementing LGBT-inclusive non-discrimination statements and codes of conduct for their global operations, these founding members–as well as those who join the coalition in the coming months and years—will have the opportunity to work with HRC and advance LGBT equality in the workplace in a number of ways. This includes hosting LGBT workplace inclusion summits in international markets, forming LGBT employee resource groups (ERGs), and amplifying the powerful business case for LGBT equality around the world. Some companies may also engage in public policy advocacy on LGBT issues, and work collaboratively with NGO and civil society groups to bolster in-country efforts to make progress on LGBT rights.

“Inclusion and diversity are fundamental to our core values, and we look forward to continuing to work with HRC in support of fairness and equal treatment for LGBT employees,” said Ellyn Shook, Chief Human Resources Officer at Accenture.  “We remain committed to an inclusive and diverse workplace – where people can feel comfortable, be themselves and, as a result, be inspired.  This rich diversity makes our company stronger, smarter and more innovative, which helps us better serve the needs of our clients and our communities.”

“Diversity and inclusion have long been a part of AT&T’s culture and operations, and we’re proud to join HRC and these businesses that share our commitment to fair and equal treatment of LGBT employees around the world,” said Cynthia Marshall, SVP – Human Resources and Chief Diversity Officer at AT&T.

“We strongly believe in equal rights for all employees including the LGBT community and believe that the world should be an inclusive place where all people are accepted, celebrated, and supported,” said Beth Conway, Vice President of Human Resources at CA Technologies. “We are honored to be a founding member of the HRC global corporate coalition.”

“At The Coca-Cola Company, diversity and inclusion are part of our core values,” said John Lewis, Chief Diversity Officer at The Coca-Cola Company. “We were one of the first companies to publicly support the U.S. Employment Non-Discrimination Act, and among the companies supporting marriage equality before the U.S. Supreme Court. We will continue to work on the advancement of LGBT equality in our workplace through both our policies and our actions.”

“With services in over 42 countries, Destination Weddings Travel Group aims to set the example for LGBT equality in the industry,” said Rebecca Hochreiter, VP, Marketing & Customer Engagement, Destination Weddings Travel Group.  “We are thrilled to take part in this momentous step with the Human Rights Campaign to promote workplace fairness for LGBT people globally.”

“As a company, we’re deeply committed to creating a fair and inclusive environment where all Googlers feel comfortable bringing their whole selves to work. We’re honored to be part of HRC’s global coalition, so together we can strive to promote equity in all workplaces around the world.” – Google.

“IBM’s global workplace culture is built on the principles of non-discrimination and equal opportunity for all,” said Lindsay-Rae McIntyre, IBM’s Chief Diversity Officer. “We championed an industry-leading policy of non-discrimination based on sexual orientation over 30 years ago, and expanded it in 2002 to cover gender identity and expression. IBM’s inclusive culture addresses the needs of our LGBT employees in over 170 countries, and we are pleased to extend our global engagement in this important dialogue as a founding member of HRC’s global coalition.”

“The strengthening of LGBT equality in the workplace makes good sense for companies and for people,” said Brad Smith, President of Microsoft Corp. “We’re committed to treating all of our employees equally, with the respect and dignity they so clearly deserve.  In 1993 Microsoft became the first Fortune 500 company to provide same-sex domestic partnership benefits. Today’s launch represents a continuation of this commitment, and we are proud to stand alongside other companies to support diversity, inclusiveness and equality.”

“P&G’s commitment to diversity and inclusion is unwavering,” said William Gipson, Procter and Gamble’s Chief Diversity Officer.  “Grounded in the values of our strong global non-discrimination policy, we are proud to join HRC’s coalition to advance global workplace equality.”

“This is a matter of fundamental fairness. As the world’s largest cybersecurity company, Symantec unequivocally supports everyone’s right to feel safe and secure, including full and equal rights for the global LGBT community. We won’t stop developing ways to foster an open and safe environment for all of our employees around the world, and we look forward to the day when we can celebrate genuine inclusion for all.” – Symantec Corp.

The announcement by President Clinton at the CGI Annual meeting will come two months before the release of HRC Foundation’s 2016 Corporate Equality Index (CEI), which measures LGBT workplace inclusion. This year, for the first time, the CEI will include criteria assessing how multinational companies treat their LGBT employees around the world–not just those in the U.S. HRC will work with its business allies to ensure that their existing best practices in the area of LGBT-inclusive policies and practices are effectively expanded to their global workforce.

About the Human Rights Campaign

The Human Rights Campaign is America’s largest civil rights organization working to achieve lesbian, gay, bisexual and transgender equality. HRC envisions a world where LGBT people are embraced as full members of society at home, at work and in every community.

About the Clinton Global Initiative

Established in 2005 by President Bill Clinton, the Clinton Global Initiative (CGI), an initiative of the Clinton Foundation, convenes global leaders to create and implement solutions to the world’s most pressing challenges. CGI Annual Meetings have brought together 190 sitting and former heads of state, more than 20 Nobel Prize laureates, and hundreds of leading CEOs, heads of foundations and NGOs, major philanthropists, and members of the media. To date, members of the CGI community have made more than 3,200 Commitments to Action, which have improved the lives of over 430 million people in more than 180 countries.

In addition to the Annual Meeting, CGI convenes CGI America, a meeting focused on collaborative solutions to economic recovery in the United States; and CGI University (CGI U), which brings together undergraduate and graduate students to address pressing challenges in their community or around the world. This year, CGI also convened CGI Middle East & Africa, which brought together leaders across sectors to take action on pressing social, economic, and environmental challenges.