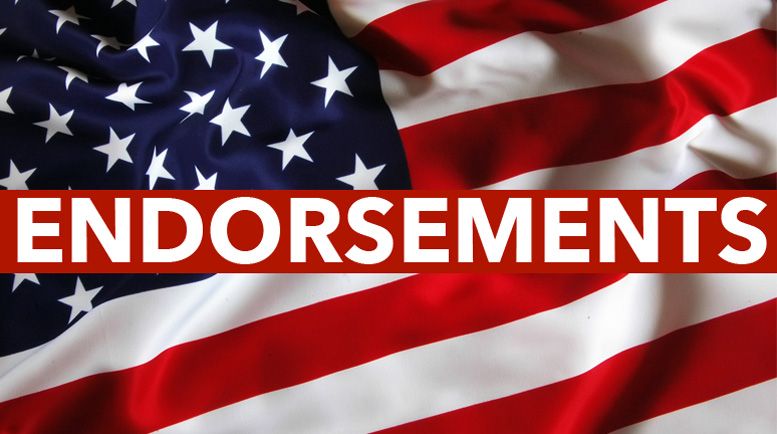 Specific Endorsements Were Carefully Selected After Thorough Reseach of Voting Stances for Incumbents and Promised Future Work For Newcomers, Especially As They Relate to the LGBTQ Community and Its Intersectionalities

By: The Rainbow Times Editorial Board—

The Rainbow Times (TRT) proudly releases its Salem and Boston endorsements for At-Large City Councilors and Ward councilors in competitive races. Each candidate and subsequent endorsements were carefully considered based on progressive values and ideals, support and advocacy (demonstrated by voting and public statements and actions) on behalf of the LGBTQ community. In addition, TRT took into consideration the candidates’ demonstrated understanding and backing of marginalized community members pertaining to immigration, race, ethnicity, socioeconomic status, age, housing, environment, compassionate policy initiatives, and a concerted effort with a track record to not only embrace diversity but the ability and intention to create inclusive cities where all residents can equally thrive.

There are three levels of competencies we examined for these endorsements, which we deem critical in local government. Cultural proficiency is needed to understand and advocate effectively on behalf of all residents equally, especially those most marginalized and often left without a voice. Secondly, a hands-on commitment to social responsibility—to our planet and the environment—to avert the climate crisis we are experiencing. And, lastly, development and infrastructure competency are indispensable to be able to move the cities forward utilizing state-of-the-art technology, creative innovation while upholding the importance of art, all of which help the municipalities to remain competitive as world-class cities in their own right. 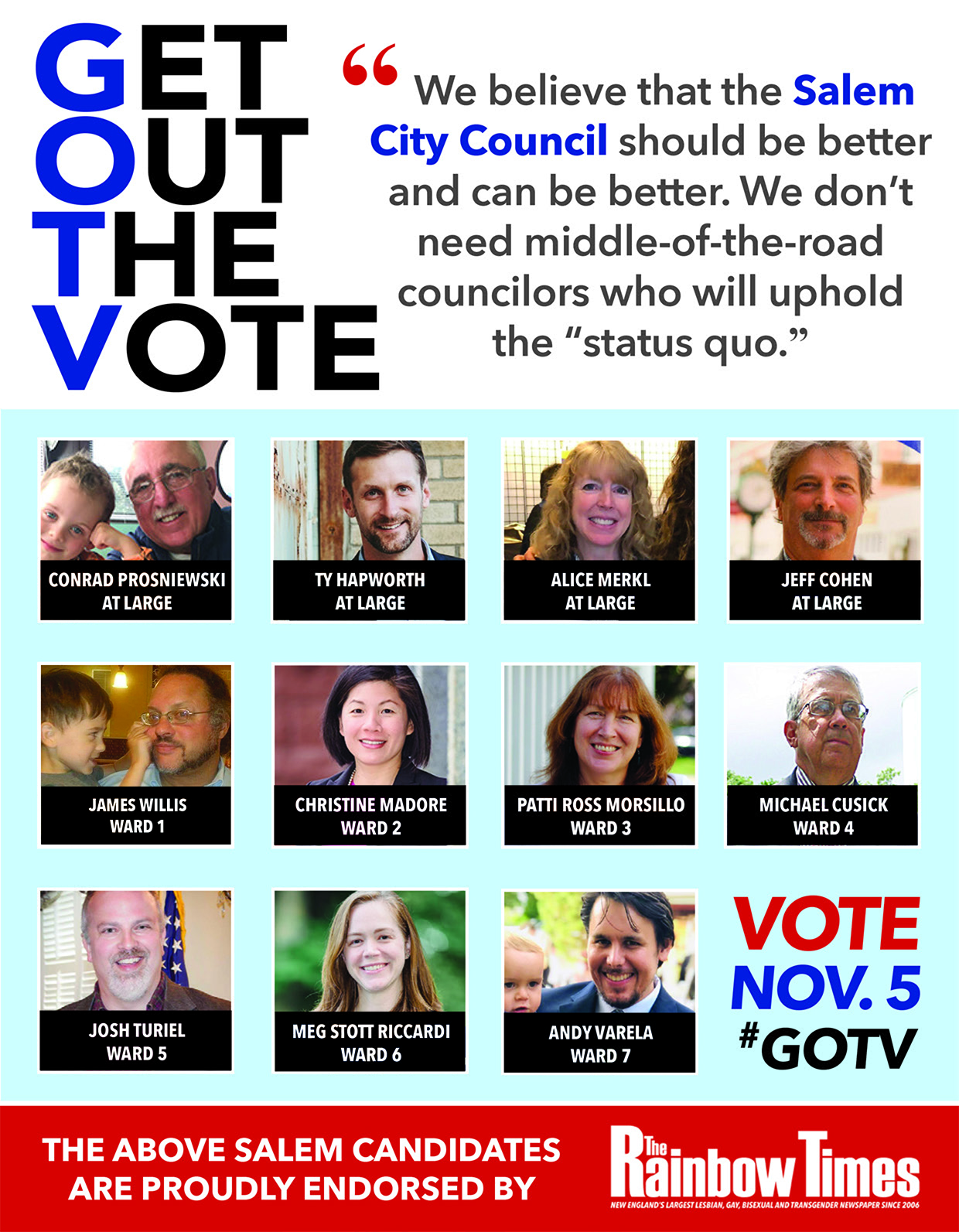 In part, The Rainbow Times’ editorial board selected Salem endorsees based on an extensive At-Large Councilors’ video series where most Salem City Council incumbents and hopefuls were interviewed, some as newcomers and others that have been around the block. The key issues we tackled during that raw video series included, affordable housing, sanctuary city status, the climate crisis, development and zoning, immigration, human rights issues and of course, the LGBTQ community. The videos spoke volumes about where candidates stand on today’s issues, who is ready to lead into the future and who is still stuck in the past.

Throughout the last several years, inarguably, we’ve found that the Council could have done better and they should have done better. With the council being divided between conservative ideals and progressive values, not all Salem residents have been able to live affordably and peacefully, not all immigrant residents have been provided the dignity and respect they deserve by some of those very councilors who still seek their vote. There have been contentious battles over commonsense initiatives like affirming support of the Yes on 3 campaign—protecting trans people in public spaces. Politics is a dirty game—we’ve all heard it. But, we believe that the Salem council should be better and can be better. We don’t need middle-of-the-road councilors who will uphold the “status quo.”

We need councilors who will be unabashedly fierce in their leadership, who will look out for all of us, who will work together to uphold progressive values in all facets of life and that will advance the city ahead, while not forgetting about the residents that need them the most to be their advocate in the process. You can’t advocate for the immigrant or Latinx community while voting against them. You can’t say you support LGBTQ rights because you “accept all of God’s children,” and you definitely cannot say you stand for the LGBTQ community members when you use words such as “preference,” “likes,” “lifestyle,” and “tolerance.” That is not support. Those are divisive words that hurt people and youth alike. Some of these words and comments weren’t aired in the interviews, but were clearly noticed by those conducting them. That is when a cliché such as “actions speak louder than words” is most observed.

In contrast, the candidates that showed a distinctive and adept understanding of marginalized groups (LGBTQs, women, immigrants, Native Americans, PoC, etc.) not just through words, but through actions, were those that The Rainbow Times’ editorial team proudly selected. These candidates’ commitment to the betterment of all reminded us of others who are currently in office and whom we have had the pleasure to endorse as well, such as Rep. Paul Tucker and even Salem’s own equality Mayor and TRT’s LGBTQ Champion Awardee, Kim Driscoll.

This year, without further adieu, we are proud to endorse Salem At-Large City Councilor candidates Jeff Cohen, Conrad J. Prosniewski, Alice Merkl and Ty Hapworth. Likewise, in highly contested races in Ward 6, we endorse Meg Riccardi and, Andy Varela in Ward 7. We are also proud to stand by Patti Ross Morsillo for Ward 3 who through demonstrated action has proven to be a vocal leader in standing up against the “status quo.” Most recently, Michael Cusick for Ward 4 has earned The Rainbow Times’ endorsement. A newcomer entering the race, Cusick strikes a sharp contrast to the current Ward 4 councilor’s divisive practices. We believe his candidacy is critical in moving Ward 4 ahead with clearly articulated strategies to tackle progressive issues and believe he will represent all constituents with fairness and compassion.

And, lastly, but not least, we stand tall with Christine Madore for Ward 2, Josh Turiel for Ward 5 and newcomer James Willis for Ward 1. Madore has demonstrated exemplary leadership over her last term as the incumbent for Ward 2, particularly with her expertise in development, which has made her a fervent warrior to help Salem eradicate the housing crisis for all residents, as she has demonstrated in various council meetings. She has taken her responsibilities seriously, communicates continually with her constituents and listens not to just some, but to all. It is our opinion that there is no better progressive candidate for Ward 2. Likewise, Turiel has stood on the side of commonsense initiatives for several years that help to move Salem forward. Though he is running uncontested this year, we are happy to endorse his candidacy. McCarthy, the incumbent, represents perhaps the most diverse ward in the city and we think his voting record is doing fairly well on progressive issues. However, Willis represents the promise of tomorrow with bold initiatives backed by a track record of activism for underrepresented communities. Ward 1 is in dire need of someone to understand and advocate daily (and timely) for resident rights. We think Willis will do that and more.

In Boston, The Rainbow Times throws its full support behind Alejandra St. Guillen. This newcomer, survivor, advocate, and member of the LGBTQ community is a walking testament to overcoming hardship and rising above to conquer all that life has thrown in her direction, including the murder of her sister.

Her existence speaks volumes to the vast intersectionalities we share, giving her a unique and commanding perspective on how best to shape local government to suit the needs of all, not just some. Boston residents will bode well to cast their vote for someone who can relate to their struggles, triumphs, and victories. St. Guillen, embodies the modern 20th-century woman who leads with valor and tenacity. Also a member of the Latinx community, she was featured in the June 2019 pride edition of The Rainbow Times. Read the full feature here to learn where she stands on all of the critical issues.

Other endorsees include Michelle Wu, who is also rumored to be a potential mayoral challenger, incumbent Annissa Essaibi-George and Julia Mejia.

Most importantly, Election Day is November 5, 2019. Get Out The Vote. Our lives depend on it.