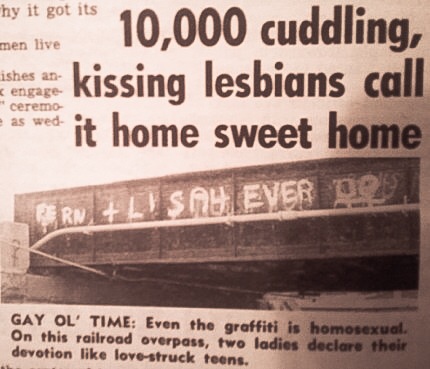 Journey Through Lesbian Mecca Will Recall Key Organizations and Locations

NORTHAMPTON, Mass.—A walking tour that reveals the untold history of Northampton’s LGBTQ (lesbian, gay, bisexual, transgender, and queer) community will take place on Sunday, May 4 at 2:00 p.m. and everyone is welcome. Offered by the Sexual Minorities Archives (SMA) as a benefit for its non-profit, the Sexual Minorities Educational Foundation (SMEF), Inc., the 2-1/2-hour walking tour, Journey Through Lesbian Mecca will include 50 stops concentrated in a three-mile area in and around downtown Northampton. Many of the locations were sites of organizations and businesses in the 1970s through early 2000s that helped shape the LGBTQ community’s emergence in the area and the city to establish its national reputation as a welcoming place for LGBTQs. The tour will also cover sites as old in history as 1899, and spaces owned or operated by LGBTQ people today.

To develop the tour, research was conducted by volunteers at the Sexual Minorities Archives, a national collection of LGBTQ literature, history, and art located in Northampton; and at the Sophia Smith Collection at Smith College. Elizabeth Kent, M.A., Brandeis University and Smith College alumna, and Bet Power, Executive Director of SMEF, Inc. and Curator of the Sexual Minorities Archives, will guide the walking tour. [pullquote]”National attention began for Northampton’s lesbian community in the 1980s due to the extensive underground of groups and businesses they built here in the 1970s. By 1995, author Michael Lowenthal said ‘Northampton is something of a lesbian Mecca, to which all dykes must make at least one pilgrimage during their lives.'”—Bet Power[/pullquote]

“The current climate of inclusion of LGBTQs in Northampton didn’t begin today and it didn’t come from nowhere,“ said Bet Power. “National attention began for Northampton’s lesbian community in the 1980s due to the extensive underground of groups and businesses they built here in the 1970s. By 1995, author Michael Lowenthal said ‘Northampton is something of a lesbian Mecca, to which all dykes must make at least one pilgrimage during their lives.’” We’ll be offering the walking tour several times this summer and fall. We think the weekend of Noho Pride is a great time to educate many people about Northampton who will already be in the area,” Power said.

Past and present locations with LGBTQ histories will be visited and discussed, such as The Egg, The Common Womon Club, Greasy Gorgon Garage, Ye Rose Tree Inn, Hover House, Womonfyre Books, Pulaski Park, Gala Bar, the Grotto, Green Street Cafe, Dyke Dorms, and more. Even sites of lesbian graffiti in the city will be covered, and the tour will swing through locations on the Smith College campus, too.

Registration is limited to 30 people. The requested donation is $20 general and $10 for seniors ages 60+, students, and low-income individuals. Those who wish to reserve a place or get more information may email sexualminorities.archives@yahoo.com or call 413-584-7616. Tour-goers may pay in advance or on the day of the tour. To learn more, visit the Sexual Minorities Archives on Facebook.