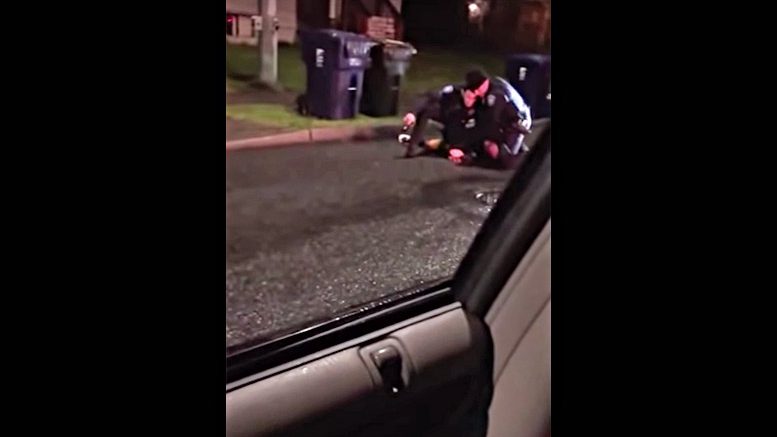 Tacoma Police officers go after Manuel Ellis and give him a brutal beating. Ellis complained that he couldn't breathe. He later died from the injuries received as a result; Photo: KING 5 / YouTube

Rebecca Parson, U.S. House Candidate, on the police killing of Manuel Ellis in Tacoma and the racist harassment of a family camping in Forks

Black Americans and other Americans of color have been suffering under systemic racism for centuries, and these recent incidents highlight the severity of the problem —and the action we must take.

TACOMA, Wash.—On March 3, 2020, Tacoma police killed Manuel Ellis, a Black man, while they had him handcuffed on the ground. A video shows a police officer punching Ellis and telling him to put his hands behind his back, even while the officer is on top of Ellis. Like George Floyd, some of Ellis’ last words were, “I can’t breathe.”

Three months later, on June 3, 2020, a multiracial family of four visiting the Olympic Peninsula from Spokane was harassed in Forks by people accusing them of being Antifa. The harassers — in at least four vehicles — then followed the family. Passengers in two of the cars appeared to be carrying semi-automatic rifles. After the family pitched a tent for the night, they heard gunshots and chainsaws down the road from where they were camping.

The family, scared for their safety, packed up to leave, only to find out that their harassers had felled trees across the road so they couldn’t leave. Four Forks High School students contacted the police while driving up the road and then used their chainsaw to clear the road for the family.

“Racism has plagued America since Europeans landed on its shores, and we have never faced up to it. We see the consequences today: police killings of Black Americans and the racist harassment of people simply trying to live their lives. A Black man should be able to walk down the street without fearing for his life. A multiracial family should be able to enjoy a camping trip free from harassment. The police officers involved in the killing of Manuel Ellis and the harassers of the Spokane family should be prosecuted to the fullest extent of the law.

“Derek Kilmer: I’m calling on you to sponsor or co-sponsor legislation to demilitarize the police.”

Rebecca Parson is a Tacoma Area Disabilities Commissioner, tenants’ rights organizer, and small business owner. She has served as a human rights observer in a paramilitary-threatened indigenous community in Mexico, as an AmeriCorps volunteer, and she worked with the International Association of Genocide Scholars. Parson is the first LGBTQ+ person and the first woman ever to run for Congress in WA-06.

Parson has been endorsed by Brand New Congress, the organization that recruited Alexandria Ocasio-Cortez to run for office, as well as Our Revolution, the Washington State Democrats’ Progressive Caucus, and City Council and School Board members in WA-06.