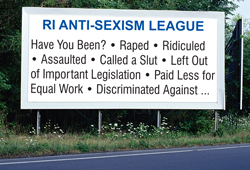 Last autumn saw the beginnings of a newly emerging movement against the rape-culture epidemic in our society. Many of the events around the country were tied together through the name Slut Walk, which is a controversial and provocative epithet meant to reclaim power from those who would demean sexual-assault victims, particularly women. In Rhode Island, what grew from the event was a group called Rhode Island Anti-Sexism League (RIASL), which held an event including a rally, march, speak-out, potluck and workshops last month. The group dubbed the event Occupy Sexism. Bolstered by the strength behind the occupy movement, RIASL set out to address many of the issues around sexism that hadn’t been adequately dealt with during the Slut Walk.

The Rainbow Times spoke with Sarah Quenon, one of the group’s lead organizers about the event and RIASL. She explained that the idea developed after last fall’s Slut Walk. She said that she was personally “really frustrated with a lot of aspects of rape culture that weren’t confronted. Sexual assault and domestic violence against men, immigrants, the LGBT community, and homeless persons were barely touched on if even mentioned at all.” Quenon said it seemed that Slut Walk had opened up a geographically far-reaching dialogue that was narrow in its content.

She went on to say that she “was also upset by the lack of discussion and workshops afterward, as well as the absence of a speak-out (that) so many attendees seemed hungry for. I wanted to recreate a similar event based on addressing rape culture, and at the same time expand it to address the multiple, far-reaching, pervasive and systemic sexist and gender-based types of oppression that make it possible for rape culture to exist. In addition I wanted to provide solutions for people and offer more than what the one-off day event could provide. I wanted to create a space for people to stay and fight in.”

When asked if she felt that RIASL adequately represented the community of Providence, she said, “If you are asking if RIASL is as diverse as the population of the city … then unfortunately no. We have some male members, persons of color, and LGBT members, some parents, teachers, older and younger members, but we are still somewhat lacking in diversity. Though I will say we have only existed as a group since last fall, and only in the last month or so have we decided upon a regularly scheduled day, time, and location to meet. I think not having that consistency before was hurting us. It would be like, ‘this week we’re meeting on Monday at 5 in so and so’s living room.’ It didn’t make us all that accessible.”

So far, Quenon says, the group has “protested the R.I. Right to Life Committee at the statehouse, organized two clinic defenses, and now done Occupy Sexism. We have so many ideas for more actions, panels, discussions, and outreach. And we’re very open to organizing around things that people in the community want to see us address.”

The group hopes to serve as a well-known community group that people can turn to at a time they say is dominated by a rollback on women’s rights, prevalence of sexism, and longstanding issues dealing with sexual assault both legally and culturally. Quenon said that anyone who wanted to attend meetings or events could attend meetings held every Sunday at 6 p.m. at Libertalia, unless otherwise noted. There’s also another clinic defense coming up on May 19 at the Women’s Medical Center of Rhode Island.

RIASL’S meetings and events can also be found at: http://bit.ly/IjdL3J