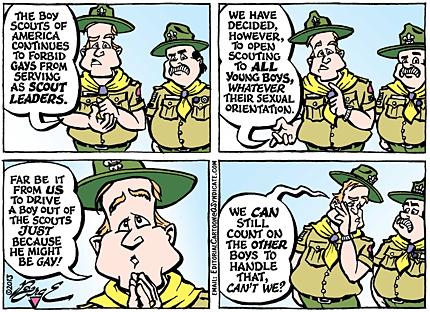 Sometime in the ‘20s my grandfather became the then-youngest Boy Scout to obtain the top rank of Eagle Scout. When he died he was as proud of that as he was of piloting ships into Tokyo Bay at the end of the war. He was a classic Scout too. The epitome of honor and resourcefulness, he whistled while he worked and did everything he could think of to make life better for the people in his world.

I never talked about the gay scouting ban with my grandfather. Maybe I didn’t give the 97-year-old guy enough credit, but I thought that conversation would be too awkward. I’d have to explain things that we just didn’t talk about together, like the difference between plain old sex and sexual orientation. And I worried he’d think I was criticizing him personally, so I cut us both some slack. You get to do that with family sometimes.

I’m not cutting the Boy Scouts of America (or “BSA”) any slack right now, though. They have announced a proposed policy change: The BSA might admit gay Scouts – but definitely not gay leaders.

So why even try? The stated basis for the ban has always been that homosexuality violates the Scout’s oath to be “morally straight.” Here’s what they mean by that: “[Y]our relationships with others should be honest and open. You should respect and defend the rights of all people. Be clean in your speech and actions, and remain faithful in your religious beliefs. (from the Boy Scout Oath and Law).

In other words, being gay is inconsistent with these characteristics. I’m not sure if it’s the honest and open part or the faith part, or whatever. I’m not privy to the bizarre conversation that must repeatedly transpire among BSA leadership every time they review and reaffirm the ban, but it’s clear to me that the new policy proposal in no way seeks to challenge the idea that gay people, by definition, cannot be “morally straight.”[pullquote]Nonetheless, the BSA may feel comfortable now allowing gay boys to join their ranks even though they have officially labeled gays unworthy of admiration. This is no compromise, but a twisted update on “don’t ask don’t tell,” and children will pay the price for adult cowardice.[/pullquote]

But wait, there’s more! They’ve also stated, “We allow youth to live as children and enjoy Scouting and its diversity without immersing them in the politics of the day … The Boy Scouts of America has always reflected the expectations that Scouting families have had for the organization. We do not believe that homosexuals provide a role model consistent with these expectations.”

Nonetheless, the BSA may feel comfortable now allowing gay boys to join their ranks even though they have officially labeled gays unworthy of admiration. This is no compromise, but a twisted update on “don’t ask don’t tell,” and children will pay the price for adult cowardice. I can’t think of a worse way of virtually dunking kids into “the politics of the day” than forcing them to parse this hypocrisy.

Imagine what this might feel like to a gay Scout. He’s allowed to join, presumably because he can’t help himself, poor thing. But the BSA can still provide a bulwark that keeps other, still-unsullied straight boys from looking up to a gay Scout leader and getting ideas. He’d learn that people like him, once they grow up, can’t be trusted to behave. What a thing to look forward to.

Where in this is the idea of strength and honesty that is all over the Boy Scout Handbook? I get that the BSA is a private organization and free to set its policy, but that doesn’t stop me from calling them out for causing harm to young people. With the mission of building character and honesty in our next generation of men, they are instead teaching that self-respect and respect for others is too fragile to withstand human difference and variety. (Interestingly, some individual chapters flout the ignorant directives from above and are thriving, of course.)

This isn’t my grandfather’s Boy Scouts. He would have struggled to understand what it meant to be gay and probably gotten it wrong in parts, but he would have measured the man, or the boy, by his actions. As a good Scout, he certainly wouldn’t have singled anyone out based on archaic stereotypes. BSA, check your own traditions and try again.

*Abby is a civil rights attorney-turned-author who has been in the LGBT rights trenches for 25+ years. She can be reached through her website: queerquestionsstraighttalk.com