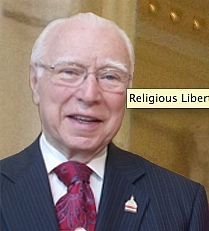 That’s the kind of message I imagine Louis Sheldon “intercepting” when he puts on his tin-foil hat.

Sheldon, the founder of the anti-gay Traditional Values Coalition, penned a pretty amazing homophobic fantasy piece for Charisma Magazine, published online on July 31 and titled “The Plan For a Gay (Domi) Nation.” In it, Sheldon claims that the gays are taking over, and that Hollywood is largely to blame. “From kindergartens to city councils to churches to the Supreme Court, the mainstreaming of homosexuality has reshaped everything in America,” he writes. “And one of the most powerful vehicles by which the gay agenda has accomplished this is media.”

I know, this is old news. Sheldon is hardly the first person to make such a claim. But Sheldon’s rantings about the homosexual “activists who have masterfully driven the gay agenda for more than 30 years and, with remarkable success and precision, changed our nation’s cultural mindset on homosexuality” have a certain hyperbolic je ne sais quoi.

Sheldon laments that gay characters on TV are often “portrayed as witty, clever, lovable and just a little quirky,” instead, as I presume Sheldon would prefer, as sad-sack sinners dying of AIDS.

And what has the promo-homo media accomplished with shows like Will and Grace and that one time Mariel Hemingway kissed Rosanne Barr on Rosanne? “It’s perfectly clear what the Hollywood writers and producers were doing – grinding away at public morality, using comedy as a vehicle to overcome the natural resistance of adults, and playing on the curiosity and credulity of children,” writes Sheldon. “By sheer persistence, the gay-friendly media have been forcing Americans to accept homosexuality as a normal and natural choice, whether they believe it or not.”

First of all, “grinding away” ha ha. Secondly, he’s right. By portraying LGBT characters in an even remotely positive way, Hollywood has managed to trick everybody into believing that LGBT people might be – could it be? – human beings capable and deserving of love and compassion. And America has been forced to accept that such a concept could even exist when everyone who hates homos knows that isn’t possibly true. Take it from Sheldon.

All of this leads Sheldon to make what is perhaps the most astounding claim I have yet heard in the “culture war” over homosexuality.  He writes, “Today, based on the large number of primetime TV shows that currently feature openly gay characters, you have to believe that the most favored and most protected type of sexuality is homosexuality.”

Wait, I’m sorry, what? Or, more specifically, WTF? What planet is this man living on? Because Glee is one of the most popular shows on TV that makes homosexuality “favored” and “protected”? Does he even know what those words mean?

If homosexuality were favored and protected in America then it would not be legal anywhere in this country to fire someone because he or she is gay. We would not see young LGBT kids driven to suicide by relentless bullying. Same-sex couples would be allowed to be legally married and have it be recognized by all 50 states. Children being raised by same-sex couples would have the full legal protection of two parents, not just the one the government deems “real.” The list, sadly, goes on and on.

But look, folks like Sheldon aren’t interested in all of that. After all, oppression is the goal. And whenever a teenage boy gets called “fag” and has the shit kicked out of him, whenever a gay man or lesbian dies and leaves behind a partner with no legal recognition, whenever another state passes an anti-gay “marriage” amendment, Sheldon’s camp celebrates.

But hey, gays always have Glee.