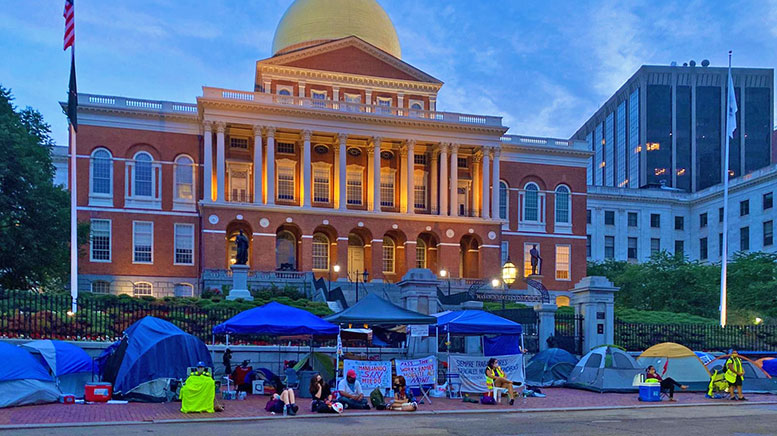 Immigrants and allies camp at the Massachusetts State House asking for Driver's licenses without anyone listening to them; Photo: Movimiento Cosecha

BOSTON—Immigrants and activists have been sleeping in tents on the State House’s front steps for a week and a half to get legislators’ attention to driver’s licenses, sacrificing in high heat and humidity, harsh rainfall, and threats that have raised increasing security concerns. All the while, legislators and the state have largely ignored the encampment, taking their time to take action on licenses despite the nearing of the legislative session, according to Movimiento Cosecha.

The statement alleged that while the immigrant community and allies were forgoing their basic necessities to fight for driver’s licenses, legislators were “comfortably at home.”

“The immigrant community’s struggles have only been heightened in the pandemic, yet still has decided to take a stand for the opportunity of having access to a driver’s license that could prevent deportation and family separation.”

To date, as the encampment has continued to persist, allegations of racism are being made, in lieu of “racist individuals that have used intimidation tactics and threats” to the protesters.

“Early yesterday morning, a man visited the campsite and asked if the camp was Black Lives Matter and repeatedly said, if it was, he would drive over them followed by a threat to beat up a member on our security team,” the release read. “The state cannot condone this treatment towards anyone, and needs to take action to support the vulnerable communities facing both systemic and individual attacks on their communities.”

“We couldn’t avoid it, we didn’t go look for him, he came to us,” said Rosa Santos, Cosecha, Worcester. “It was ugly, we know folks are against this bill and don’t support us, and we are here to get a vote so that we would be able to get out of the shadows and drive without fear. Legislators need to take us into account, we are your neighbors, we are your community too, you need to govern for all your community. We live here and contribute, our children go to school. We feel ignored and it’s your job to make a decision and can’t avoid it.” 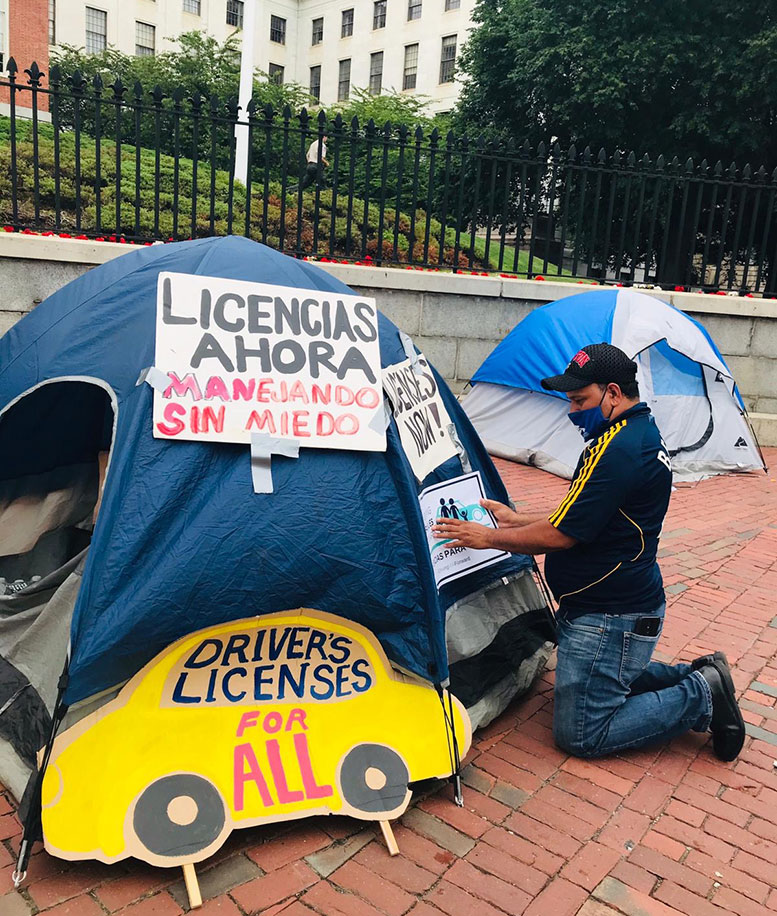 In the face of the worst attacks against immigrants in this country, Massachusetts continues to take its time when it comes to protections for the immigrant community, they allege. According to Cosecha, the lack of immigration legislation in Massachusetts and the total dismissal of the 10-day encampment at the State House is unfathomable. They state they are merely “asking for dignity and respect for immigrants. It seems the immigrant community can not do enough to receive the support of legislators.” 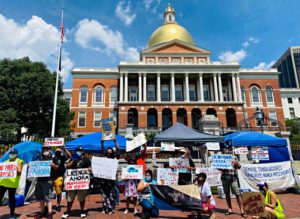 While 16 other states including Utah and Virginia have already passed similar legislation, Massachusetts is “showing its true colors, not as the blue liberal bastion it claims to be, but as a state who takes no action to protect its most vulnerable neighbors.”

“If legislators are not able to pass licenses before the legislative session ends, legislators will get to take a break, while undocumented immigrants will not get such a luxury. These last remaining days will be telling of whether or not Massachusetts will show they have the back of those in their community.”