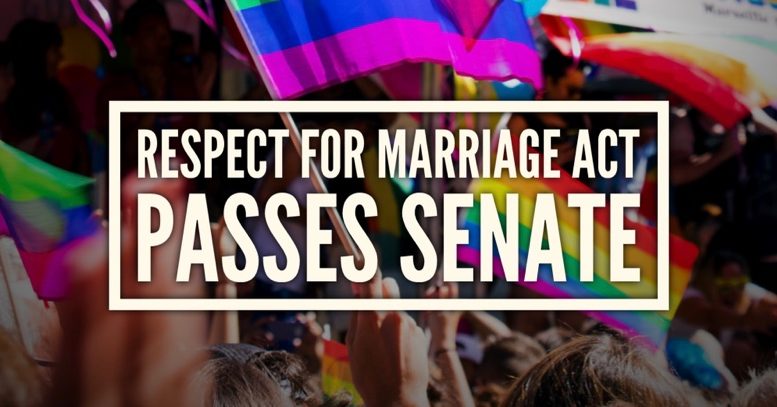 The U.S. Senate bill Now Goes to the House of Representatives To Approve The Senate-Amended Version

In a 61-36 vote the United States Senate today passed the Respect for Marriage Act (RFMA), the most comprehensive piece of national legislation that will codify marriage equality into federal law. Bill H.R. 8404 will now go back to the House of Representatives before going to President Biden’s desk to sign into law.

“With today’s bipartisan Senate passage of the Respect for Marriage Act, the United States is on the brink of reaffirming a fundamental truth: love is love, and Americans should have the right to marry the person they love,” said President Joseph R. Biden who is expected to sign the bill into law once approved in its final passage by the House of Representatives.

“For millions of Americans, this legislation will safeguard the rights and protections to which LGBTQI+ and interracial couples and their children are entitled. It will also ensure that, for generations to follow, LGBTQI+ youth will grow up knowing that they, too, can lead full, happy lives and build families of their own.”

President Biden congratulated the bipartisan work that culminated in what is to be a sigh of relief for many LGBTQIA+ couples who have even considered moving or traveling to other parts of the country to safeguard the right to marry.

“Importantly, the Senate’s passage of the Respect for Marriage Act is a bipartisan achievement,” said the President. “I’m grateful to the determined Members of Congress — especially Senators Baldwin, Collins, Portman, Sinema, Tillis, and Feinstein — whose leadership has underscored that Republicans and Democrats together support the essential right of LGBTQI+ and interracial couples to marry. I look forward to welcoming them at the White House after the House passes this legislation and sends it to my desk, where I will promptly and proudly sign it into law.”

This means that the bill will officially repeal the Defense of Marriage Act, DOMA, (which has been unenforceable since it was ruled unconstitutional by the Supreme Court in 2015), codify federal benefits to married couples no matter where they live, as long as they were legally married in the state they resided at the time, something that other states must legally credit the validity of such same-sex marriages.

In Massachusetts, where marriage equality was first legalized in the commonwealth in 2004, Mary Bonauto, GLBTQ LEGAL ADVOCATES & DEFENDERS (GLAD) Senior Director of Civil Rights and Legal Strategies, who argued the landmark Obergefell marriage equality case before the Supreme Court, issued a statement about the news.

“Today Senators on both sides of the aisle came together to ensure that married couples and their families will remain protected under law. In a time of escalating attacks on our LGBTQ+ communities, it is also important to see our country come together to protect fundamental rights,” said Bonauto. “This bill solidifies what Loving v. Virginia and Obergefell v. Hodges affirmed, that people’s marriages are to be respected regardless of race or sex. As the votes in Congress attest, LGBTQ+ people belong and are part of our families, our communities, and our country.

“This is a critical victory on the road to the day when all people are fully protected from discrimination and have the freedom to make decisions about their lives and families.”

“Today, a bipartisan group of 61 Senators made clear that this country will not roll back the clock on marriage equality,” said Congressman David N. Cicilline (RI-01), Chair of the Equality Caucus. “The Respect for Marriage Act is a crucial safeguard for LGBTQ+ people whose lives have been forever changed by Obergefell v. Hodges and Americans who are in interracial marriages thanks to Loving v. Virginia. On June 26, 2015, the Supreme Court declared marriage equality as the law of the land. … I look forward to quickly passing the Senate-passed version of the bill in the House and sending it to the President’s desk.”

Equality Florida, an organization that has fought fiercely for gay rights in a state where gay couples are forced to live under the radar and where Gov. Ron DeSantis signed and openly supported the “Don’t Say Gay” law that took effect in June of this year, issued the following statement.

“This is an incredibly important win for LGBTQ equality and the rights of people who’ve married the person they love,” read the organization’s statement. “The Respect for Marriage Act affirms the status quo, safeguards federal marriage benefits and repeals outdated and unconstitutional federal law that once recognized marriage as only between one man and one woman.

“This is a critical reassurance for individuals and families in states like Florida that shamefully still have their own outdated and unconstitutional state marriage discrimination laws and a repudiation of U.S. Supreme Court Justice Clarence Thomas’ recent commentary that instilled fear in LGBTQ Floridians that their marriage rights could be torn away via attempts to revive those statutes.”

Although this bill will help same-sex couples legally, it doesn’t address the incidence of discrimination, persecution and criminalization that LGBTQIA+ people go through nationwide — laws that many states are passing or in the process of passing.