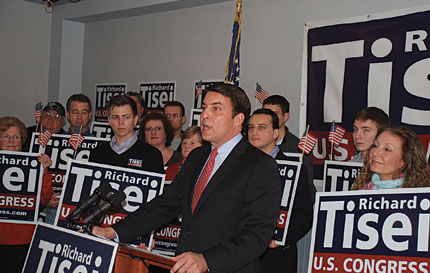 WAKEFIELD, Mass. — No Republican candidate has ever been openly gay when first elected to the U.S. House of Representatives, and no openly gay Republicans have served in Congress since Rep. Jim Kolbe of Arizona retired in 2006. In Massachusetts, moreover, the GOP has not won a House seat since 1994. However, that political status quo is likely to be tested again this fall as openly gay Richard Tisei announced his candidacy in the Massachusetts 6th Congressional District.

“I’m running for Congress because Massachusetts deserves an independent voice in Washington who actually takes time to listen,” Tisei told approximately 125 supporters Thursday, January 23, at the Wakefield Americal Civic Center, where he made his candidacy official. [pullquote]This is Tisei’s second run for the House. Two years ago, he came within one percentage point of ousting longtime, eight-term incumbent U.S. Rep. John Tierney of Salem.[/pullquote]

This is Tisei’s second run for the House. Two years ago, he came within one percentage point of ousting longtime, eight-term incumbent U.S. Rep. John Tierney of Salem. The district includes North Shore and most of Essex County.

Tisei’s brief remarks touched upon major campaign themes — lower taxes, limited government, personal responsibility, and freedom. Tisei also called out another campaign theme: “Obamacare,” of which he said is “the biggest expansion of government in our lifetime,” causing “millions to lose their healthcare coverage and left millions more with fewer choices and higher premiums.”

To drive home the point, small business owner Erin Calvo-Bacci of Reading, who owns a family-run chocolate company, told the gathering the Affordable Care Act, the national healthcare plan, “forced us to sell our home in Wakefield and move a family of five to a two-bedroom apartment above one of our stores.”

In a pitch to former Tierney backers, Mike Buetow of Amesbury, who also spoke to the crowd, said, “I punched the Democratic ticket [before]. In Massachusetts, that’s the easy way out. Not anymore. Richard is nothing like his opponents say. He is a listener.”

During his remarks, Tisei swiped at national Democratic Party leadership.

“Nancy Pelosi does not represent the North Shore,” Tisei said, pledging not to “follow the leader,” as Tisei said Tierney has, voting with party leaders “99 percent of the time.” [pullquote]Tisei also called out another campaign theme: “Obamacare,” of which he said is “the biggest expansion of government in our lifetime,” causing “millions to lose their healthcare coverage and left millions more with fewer choices and higher premiums.” [/pullquote]

Afterwards, when asked about House Speaker John Boehner’s refusal to bring federal employment non-discrimination protection to a vote, Tisei said, “I don’t agree with the party. I think the party is wrong on issues like ENDA [Employment Non-Discrimination Act].”

In a bid for bipartisan advocacy on LGBT rights, Tisei added, “It’s important to have people on both sides of the aisle,” with Republicans “standing up and saying everyone should be treated equally and fully protected under the law.”

“I’ve done that as a legislator here and will do that in Washington,” Tisei said. “I’d support ENDA and probably would co-sponsor it as well.”

Also on hand for the official announcement was Bernie Starr, Tisei’s longtime partner and now husband. The couple was married last summer. Asked about any role in the campaign, Starr said he would “be going to more functions and be at [Tisei’s] side more.”

Reid Lavoie was also present for the announcement and said he liked Tisei’s “common sense” and “practical” approach. For those who are “not policy wonks,” said Lavoie, “Richard does things that make sense.”

Sure enough, Tisei is somewhat at odds with the GOP. He is openly gay, pro-choice and favors same-sex marriage. However, he is not the only openly gay Republican seeking to serve in the U.S. House. In nearby New Hampshire, Dan Innis, a former business school dean, launched his candidacy last October for the House in the Granite State’s 1st Congressional District, which includes most of the eastern part of the state. Like Tisei, Innis is married even as many elected Republicans denounce same-sex marriage and GOP religious conservatives consider homosexuality, let alone same-gender sexual activity, to be immoral.

Already, all three gay GOP candidates have raised concerns and objections from Republican partisans. At the end of last year, U.S. Rep. Randy Forbes, a Virginia Republican, said national GOP campaign efforts should not support openly gay candidates. However, Speaker Boehner has said he would support them. In fact, when Tisei ran in 2012, the Ohio Republican traveled to Massachusetts, helping to raise campaign funds for Tisei.

Currently, Democrats have eight openly gay members serving in Congress, including U.S. Senator Tammy Baldwin of Wisconsin, who made history in 2012 as the nation’s first openly gay senator.

Meanwhile, the House seat in Massachusetts’ 6th Congressional District is one of the nation’s most closely watched races. Roll Call Newspaper Online identifies Tierney as one of ten “most vulnerable House members.” In a November 5 article, the publication noted, “If Tierney survives the primary, he is likely to face another tough election against Tisei,” adding, “Without Obama on the ticket, Tierney won’t have much help to pull him over the finish line.”

Tierney faces two primary challengers who are likely to press Tierney on “his past ethical dust ups,” according to Roll Call, which include “his wife’s ties to an illegal gambling ring run by her brother.” Still, “Some Democrats argue Tierney is in better shape going into 2014,” Roll Call pointed out, given “an ethics investigation into his personal finances behind him.”

At his announcement, however, Tisei seemed disinclined to revisit Tierney’s past difficulties.

“I am anxious to have a discussion on issues that are important to peoples’ daily lives,” Tisei said, adding he would focus on Tierney’s “bad judgment” in Washington on “taxes, spending, the economy, and Obamacare.”