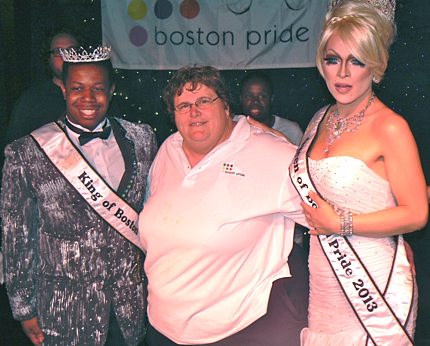 Boston Pride volunteer Charles Reinhardt McGarvey shared why he thinks events like the Royal Pageant are an important part of Pride.

Brian Curr, another Boston Pride volunteer, said he respected the courage of the performers.

“I would love to say that I’m confident enough to get up there and be as fierce and empowered and as artistic and amazing, but I’m not, so I can sit back and respect that,” Curr said.

The contestants in the Queen category were Kris Knievil, Willmuh Dickfit and Phaedra Phaded. The King contestants included Joey Lazzerini, Roman St. James, Chris Rod and Willyum LaBeija. An interview round was conducted in days prior to the event. At the pageant, contestants competed in three rounds: presentation, performance and evening wear. Performers entertained the crowd in between rounds, and at the end of the night, Phaedra Phaded and Willyum LaBeija were crowned Queen and King for 2013.

“[Drag] celebrates uniqueness,” said audience member Bokay. “I can be whoever I want to be. It really brings out the creative side of me and it takes away all the barriers.”