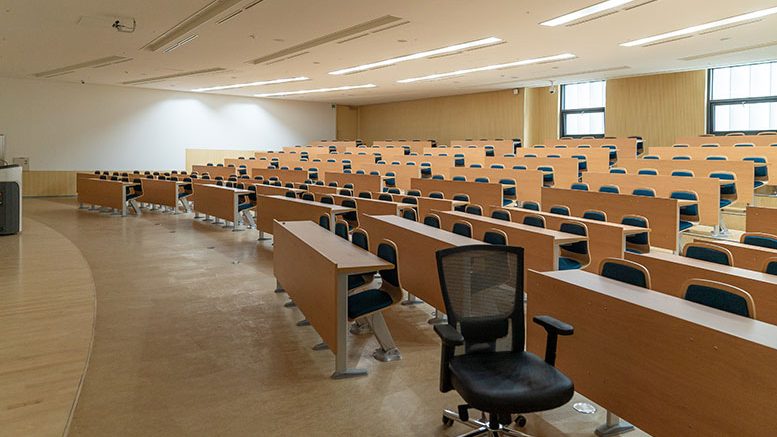 The threat of eternal return; college and what it means to go back

The new phase in Mass American hypocrisy is here, and this time it’s in the form of returning to campus or college life.

Wasn’t it just six short months ago, with only fifty or so confirmed COVID-19 cases nationwide, that students were kicked off college campuses in the face of great impending danger? At first, the national attitude seemed to be: “Things are bad. Really bad. Go home, stay inside, be safe, and we’ll get through this.” But as Americans lost their patience, as cases gradually mounted, and people (paradoxically) began to take the pandemic less and less seriously, the general attitude shifted more to a Berkeleyan: “If I don’t acknowledge it, it’s not there.”

With the situation now much worse—in so many ways—than we could’ve even imagined back in March, it seems preposterous that colleges should be taking this naïve approach to resuming business this fall. Indeed, early on in the pandemic, many of the big gunners like Notre Dame had decided to have in-person classes this fall; “worth the risk,” they said in late May.

I won’t deny the therapeutic and comforting effect of acting like things will return to normal (even when they’re anything but); it’s a coping method. And it makes sense, too. Online learning was, I think we can safely say, more or less a disaster. Colleges, who rely heavily on alumni donations, want to be able to communicate to those with cash that things will be alright, that their students will be able to have a real “college experience” this fall, that they are somehow immune from the disastrous effects COVID-19 is wreaking on the entire world.

Alas, we are only days into the school year and things are—as of the end of August when I wrote this piece—already going terribly. Like clockwork, again Notre Dame suspended in-person classes after student parties led to COVID outbreaks; and, in Northfield, Minn., the town where my college is located, 17 students were just suspended for partying and causing a virus outbreak.

At Notre Dame, according to the New York Times, “12,000 undergraduate and graduate students were tested before they could return to campus on Aug. 3 to start classes a week later. The few dozen who tested positive were told to stay home. Yet by Tuesday, the school reported that at least 147 people had tested positive for the virus over the last two weeks.” The vast majority of those who tested positive were students, and university personnel confirmed the cases’ connection to “two off-campus parties where students, mostly seniors, did not wear masks or practice social distancing.”

And a similar situation in Northfield, Minn. The off-campus party at which 17 students were exposed to COVID-19 opened up a whole web of potential exposures to the virus. According to the Minneapolis Star-Tribune, “fifty students need to quarantine due to a lack of social distancing.”

These things are preventable. This virus can be eradicated. The number of deaths can greatly diminish if only those in leadership roles listened to the experts.

This obviously affects colleges and their students on a basic level: The schools lose money and students lose their opportunity to attend school in-person—and they have to go through the rigmarole of getting back home.

But the inefficacy with which colleges have been handling the return to campus has a deeper, more nuanced implication: It directly harms LGBTQ+ students (and those of other marginalized groups) and places them at a stark disadvantage.

Consider the housing aspect. Multitudes of LGBTQ+-identifying students have been forced to stay at home (often with family) because of the pandemic, many of whose environments could be—and are—toxic and harmful for the students. Being on-campus, in-person, operates as a haven in such situations; it is a legitimate refuge for people who do not feel safe at home.

Obviously, health is an issue here, too. The danger and instability of in-person learning puts at risk many marginalized students, especially those who are immunocompromised or live with a disability. Similarly to (or perhaps intimately connected with) the housing issue mentioned before, a return to campus this fall also likely meant, for many students, a guaranteed safe environment where they could learn in isolation and be more protected from the threat of COVID-19 than in, say, a city or other heavily hit community.

But not so. Reckless behavior, partying, and socializing have all led to in-person classes—and the “new normal” in general—seem ever further away. I don’t think all this would have necessarily happened if colleges had limited in-person spots to those who had a demonstrated need to return like LGBTQ+ students, those from disadvantaged groups, those with toxic home situations, international students … etc.

To continue reading the rest of this story, visit Trans Headlines.