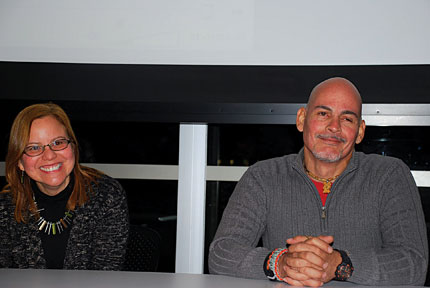 Siblings Luz Marilis López and Oscar López speaking at a "Before God, We are all Family" film screening and panel discussion, held at Fenway Health.
Photo: Chuck Colbert

Siblings Luz Marilis López and Oscar López speaking at a “Before God, We are all Family” film screening and panel discussion, held at Fenway Health.
Photo: Chuck Colbert

BOSTON, Mass.—Faith and familia—la familia—play critical roles in the lives and identities of many Latin@s. Sometimes, for LGBT people, the two come into tension, even sharp conflict, raising any number of questions, when a Latino man or woman comes out as gay, lesbian, bisexual or transgender.

Before God, We are all Family tells in poignant and highly personal terms the stories of five religious Latino families, who dealing with negative messages from Catholic and Evangelical Protestant churches, find reconciliation in love and acceptance by parents, siblings, and extended familia members. Shot in the United States and Puerto Rico, Before God moves between English and Spanish language speakers, featuring immigrant and native-born Latin@s, who share the challenges coming out presents not only for them, but also their parents and siblings who are forced out of the closet along with them.

A screening last month at Fenway Health brought together Before God’s  producer, Alex Gómez;  Lisbeth Meléndez Rivera, manager, A La Familia project at the Human Rights Campaign Foundation; Luz Marilis López, Ph.D., clinical associate professor at Boston University; and Oscar López, brother of Luz. The film features siblings Luz and Oscar, natives of Puerto Rico, and their story. [pullquote]“Religion can be a source of faith and freedom,” Luz said.  “It can also be a source of oppression.”[/pullquote]

In the documentary, Luz spoke of growing up and attending Catholic schools where she said she received “religious messages against gays and lesbians.”

Luz told of her first experience with a woman in the United States, which she explained on camera left her “very confused.”

“I started questioning myself,” said Luz. “Then I started praying a lot and not knowing what God wanted of me.”

“I think religion affected my [family member’s] reaction to my news,” Luz said. “They are very faithful, me too. They were struggling so much about God’s presence in my life.”

Before telling her parents, Luz lived with a partner, who is Jewish, for six years.

“Cultural barriers” prevented Luz from being fully open, she said, explaining, “a culture still of homophobia, so I am careful” in self-disclosures.

During the panel discussion, Luz told a gathering of about 100 people that initially she did not want to participate in the documentary.

“No way, José,” she quipped. “I am a very proud Latino Puerto Rican and talk about it comfortably, but on this topic [her sexual orientation], no way.”

After Meléndez Rivera’s pleasant persistence, Luz finally agreed. For her, redemption and reconciliation came from the words of encouragement spoken by her brother Oscar to her for the first time in the documentary.[pullquote] “Cultural barriers” prevented Luz from being fully open, she said, explaining, “a culture still of homophobia, so I am careful” in self-disclosures.[/pullquote]

“His love and acceptance has been amazing,” Luz told the Fenway gathering.

Members of the audience at the screening voiced praise for the filmmakers and gratitude for its production, which was more than a year or so in the works.

“Often times the negative and dogmatic position of religion places family in a real bind–accept and love my child and ‘betray’ God and God’s teaching versus accept the teachings of my religion and reject my child,” said Lourdes Rodríguez-Nogués, Ed.D. “This is an unbearable choice that does violence to families. In a culture where family is so central to society as it is in the Latino culture, this kind of dilemma is a tragedy.”

Rodríguez-Nogués, who serves a president of the board of directors for DignityUSA, LGBT Catholic advocacy organization, said the film could be used to heal those who are “wrestling with a way to reconcile faith and GLBT issues in the midst of their families.”

“This film shows that it is not true that Latino families are more conservative and reject their GLBT children in higher numbers that the majority white, Anglo culture,” said Rodríguez-Nogués. “Rather, it reminds us that the family is at the center of the Latino culture and that Latino people make choices every day to support, embrace and value all members of their families.”

“There are still a lot of myths out there about how Latino families respond to LGBT family members,” said Duddy-Burke. “While it’s true that faith is a powerful force for many Hispanics, and that negative messages about LGBT people from faith communities often present an initial challenge in coping with this news, I think society too often fails to follow people through the path of coming to acceptance and affirmation. The love and connection that the families in this film demonstrated is a powerful truth that I hope reaches a broad audience.”

HRC’s Meléndez Rivera said the documentary has already been shown in Washington, D.C., Milwaukee, Wisconsin, Denver, Colorado, Oregon, and Puerto Rico, with future screenings set for various cities in California and Texas, among others.

Before God, We are all Family has a companion piece, a 126-page discussion and training booklet, designed to facilitate further conversation. It is available in PDF format at www.hrc.org/familia.