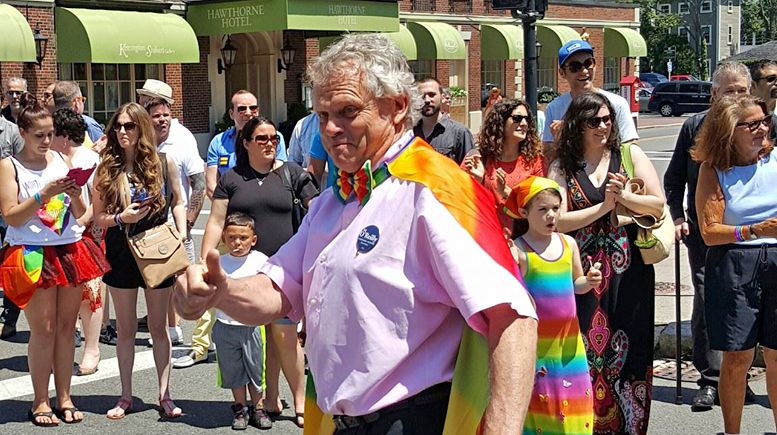 The Rainbow Times, TRT, caught up with Ed O’Reilly to get to know the candidate better. In particular, TRT wanted to know more about his views on not just being one of the candidates campaigning for the Essex County Sheriff position, but to about the LGBT community and his views on how to work with its members.

Q: Why are you running for Essex County Sheriff?

A: I am running for Sheriff because I believe in treatment for those who are sentenced to the House of Corrections and programs to successfully re-integrate people sentence into their communities.

Q: What separates you from the many other candidates running for Essex County Sheriff’s Office?

A: The job of Sheriff is NOT primarily one of law enforcement, as many people believe. Law enforcement has already taken place and that is why the person has ended up in the House of Corrections. I am the only candidate in this race who has both a Corrections background and over 30 years of experience in the criminal justice system, as a criminal defense attorney. For 34 years, I have represented and helped people with drug and alcohol problems. I have extensive experience in the area of substance abuse and addiction and have been in recovery, myself, for over 27 years. Unlike State Prison, where I worked before becoming a firefighter and then an attorney, 100% of the people sentenced to the House of Corrections are released with the average “stay” being 9 months. With approximately 85-90% of the people sentenced being related to drugs or alcohol, I am uniquely qualified to be the next Sheriff. No other candidate possesses the knowledge or experience I have in the Essex County Courts. The job of Sheriff requires vision and commitment.

As the only candidate for Sheriff who has wholeheartedly endorsed Gloucester’s Angel Program from the very beginning, I support it because it represents Treatment Upon Demand. Since denial is part of the disease of alcoholism and drug addiction, it is essential that when the alcoholic or addict has a moment of clarity or hits bottom, that treatment is immediately available. No other candidate has supported the Angel Program in any speech or campaign literature; although one is now saying he supports it, but does not seem to understand it. Treatment upon demand is essential to diverting people away from jail.

Q: What is your stance on LGBT, women, and Hispanic offenders? Please explain.

On the issue of LGBT, women and Hispanic prisoners, I support Sheriff Cousins in his newest plan to bring a detox program to the jail to treat women the same as men. Sheriff Cousins was the first Sheriff to take women out of Framingham State Prison and make the same programs available to women when he opened the Women in Transition Program in Salisbury. Unlike the other candidates, I have visited women housed in Framingham State Prison as well as the WIT program in Salisbury. My goal is to have _no_ women housed in Framingham and give them equal opportunities to treatment and training/educational programs. It is my highest priority. In terms of the LGBT prisoners, each one will be evaluated and classified with their best interests in mind. In fact, I want to have an individual treatment program for every inmate who is sentenced to the house of corrections. Of course, the safety of each individual is of paramount importance and this is particularly true with members of the LGBT community. Hispanics make up approximately 40% of the Essex County House of Corrections population, which is way out of whack with the general population of Essex County, which has approximately a 15% Hispanic population. We need to look at the cause of this huge disparity as well as actively recruit Spanish-speaking staff members.

Q: Who has endorsed you already?

I have been unanimously endorsed by the Gloucester Firefighters IAFF Local 762 and by Governor’s Councilor Eileen Duff, State Committee Member Hilary McCamic, Gloucester Mayor Sefatia Romeo Theken, State Representative Ann Margaret Ferrante, and former Newburyport area State Representative Michael Costello. We are still at the beginning stages of the campaign and there will be others.

Q: If you won, would you train your office and staff to appropriately work and understand members of the LGBT community?

A: I will not only train my staff to work appropriately with members of the LGBT community, but will actively recruit members of the community to be on my staff. I have been a long time supporter of marriage equality and other issues affecting the LGBT community and will continue to do so, as Sheriff. I have worked my entire career to protect civil rights and I believe everyone should be treated with equality, dignity and respect.

For more information about what Ed O’Reilly stands for visit edoreilly.com.