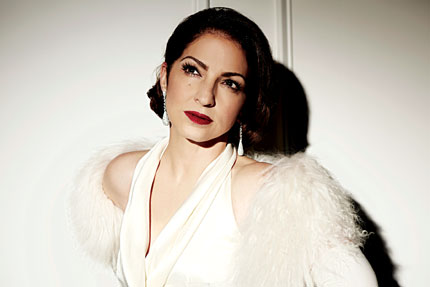 Gloria Estefan talks about her gay fans, her stops at gay clubs and how the gays saved her.
Photo: Jesus Cordero

Gloria Estefan talks about her gay fans, her stops at gay clubs and how the gays saved her.
Photo: Jesus Cordero

The Queen of Latin Pop on covers album, being ‘saved’ by gay fans and Broadway musical

You’d be lucky to see Gloria Estefan busting out the conga these days, but that doesn’t mean she’s not keeping on her toes. A spot on Glee last year, a new album, an upcoming Broadway musical, restaurants, hotels – the singer’s busier than ever, she says.

We caught up with Estefan to chat about plans for her upcoming autobiographical stage show, being “saved” by gay fans and punking people with Gloria drag queens.

Chris Azzopardi: What’s life like now for you compared to what it was in the ’80s?

Gloria Estefan: Supposedly I’m leading a quieter life, but I’m busier than I’ve ever been! (Laughs) In the ’80s, I was on the same cycle: write, go into the studio, record, then go on tour. All I could do was sleep, exercise and sing in the shows. I could do absolutely nothing else. Now, we just do so many other things. Back then we didn’t have two hotels and seven restaurants – all that came later – so in essence, we’re probably busier now than we’ve ever been. Plus: We’re working on that Broadway show. It’s very exciting.

Q. The Broadway musical is inspired by your own life. How did the idea first come to you?

A. We’ve had many offers through the years to do something like this, so we’ve been working on an idea for a Broadway-type show for over 10 years. You can’t do it on your entire life. We’ve been able to synthesize what part of our story would make a great Broadway show. It’s really on the fast track, and we hope to be done with the book by January. It’s being written by Alex Dinelaris, who just did The Bodyguard in London. He wrote that and he really gets it. I really loved his approach. We’re incorporating the songs (of mine) with a meaning into the storyline, and of course I’ll do some rewrites, some interesting little turns and some new music as well. I love that, because the creative process for me is my favorite part of everything. Also, we’re very excited about finding a young Gloria and Emilio (Estefan, her husband). Whoever plays me already has their work cut out for her!

Q. There’s been talk of Jennifer Lopez playing you. How likely is that?

A. I don’t know where people get all these rumors, quite honestly. I don’t think J. Lo would wanna do eight shows a week on Broadway. I don’t think that’s high on her list of priorities! (Laughs) But yeah, it’s an iconic role and I would love to find somebody new – a breakout. I honestly think there’s a reality show in the search for them, so we may even do that. It’d be a fun thing to share. After seeing Smash – I used to love that show and I don’t know why it got canceled – it’d be cool to do something like that.

Q. You mention writing new music. So despite doing this covers album you just released, The Standards, you must feel like you still have more to say musically?

A. I sure hope so. Music is my life. It’s always been. Your life evolves, your career evolves, and you can’t always be at the top. But I love music, so I might take a step back from the performance angle – and have done that already when my daughter was in school. But now she’s off to college, and so I wanna stay busy as hell!

Q. People used to say you were too American for the Latins and too Latin for the Americans. What did it feel like living between those two worlds? Did you feel like an outsider?

A. Because I’ve lived in this bubble, sometimes you do. Early on, when I was a very little girl, I still remember trying to look for an apartment in Miami – you’re talking 1960 – and there were signs that said “No children, no pets, no Cubans,” and my mom would cry. I would say, “Mommy, what’s happening?” And I could see it. She tried to keep it away from me, but I saw discrimination back then.

I’ve led a kind of sheltered experience, and there’s always gonna be bigotry and racism – that’s just the way human beings are. People feel better about themselves if they put somebody else down. They’re always gonna find a group to accomplish that.

Q. Last season, you guest starred as Santana’s mom on Glee. I loved that you were the mother of a lesbian daughter.

A. Me too! I have no qualms about any of that. My son’s already married, but if my daughter were to be gay, to me, it makes no difference. My daughter is the most wonderful human being in the entire world, and all I want her to be is happy and I will love whomever she loves.

Q. I wish every parent could say the same.

A. People have a tough time with things they don’t understand.

Q. What was your experience on Glee last year?

A. I loved it and I hope that it happens again. They’ve pretty much gone to a different arc and Naya (Rivera, who plays Santana) has a new girlfriend this season, but I’m a big Ryan Murphy fan – and a “gleek” – so I’m really hoping I get back on. It was wonderful. I got to meet Cory (Monteith, who died earlier this year from an overdose). Poor thing. He was very sweet and so talented, and what a shame. It’s just really a shame because it’s a waste. We lost a lot of great people that way.

Q. What’s the story behind how The Standards came to be?

I’ve sung this genre since I was a kid. I grew up listening to all this music with my mom at my home, and then when I could play guitar I would play these songs for my dad and my mom. When I started having a career, I thought one day I would love nothing more than to do an album like this.

Q. How do you put your own spin on songs that have been covered so often already?

A. I literally bought six to seven versions that I was doing – the biggest versions of all the songs – because I wanted to make sure I wasn’t gonna make choices that weren’t mine. I just went inward and focused on the reasons I had chosen the songs and the inspiration for them and just let myself be free. Also, listening to those musicians was a big inspiration. They took me certain places. It was just about bringing the most me I could to the songs.

Q. You can’t do an interview with Gloria Estefan for gay press without bringing up the video for “Everlasting Love,” which starred just drag queens.

A. (Laughs) Lemme tell you, baby, that was my favorite video – because they saved me! I was so, so pregnant, and there was no way I could even put my face in there. It was my idea, actually. I go, “Who does me better than my gays?” I mean, I have seen a few of them through the years at different places, and at shows, where they would do different phases of me, and I thought, “Oh god, this would be so cool.” Then I took a couple of them on the road with me. And they would fool people! People would think it was me! (Laughs)

Q. At what moment in your career did you know a lot of gay people loved you?

A. We were looking to do a remix of a song called “Dr. Beat” that we had put on our seventh album, which was our fourth Sony album. Someone told us there was a guy in Puerto Rico that was DJing at a gay club there and that he was doing amazing things with our Spanish hits, because we hadn’t had any English hits yet. So the gay clubs were very much onto our music even before the English stuff came out. We knew they were always cutting-edge and Pablo Flores did many remixes for us over the years, from “Conga” to “Rhythm is Gonna Get You” to, more recently, “Hotel Nacional” and “Wepa.” He’s been huge in our lives.

Q. Do you keep gay audiences in mind while making music, then?

A. Yes, totally! We knew we had an avenue to really express ourselves in a whole other genre in the dance market. Now the dance market is really mainstream, but back then people didn’t hear dance remixes unless they were in a club. That was the way it was. It was very much cutting-edge and very much its own genre.

Q. Early last year you made a pit stop at a gay club in Miami to thank your gay fans and introduce your new single at the time, “Hotel Nacional.” What’s it like being in a room full of gay Gloria fans?

A. A blast! They’re the best. The gay community has always been first on all my records and they were the ones who gave my dance music a shot to begin with, so they are an amazing consumer of music, they’re very savvy and they’re always ahead of the curve. They’re very important to me. And I had a lot of fun there!

Q. What does it mean to have an audience that’s been so loyal over the last three decades?

A. It’s wonderful. I’m all about family – and my fans are family. The only reason I actually toured was to cement those relationships. It was grueling for me, but so worthwhile to be there on the stage so we could share more than just the music, because for that they could stay at home. I’m very appreciative of that (relationship). I don’t take it for granted.