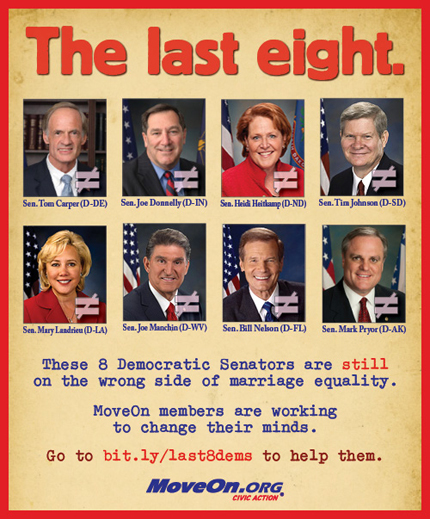 WASHINGTON, DC –  MoveOn.org members from Arkansas, Florida, Indiana, West Virginia, South Dakota, North Dakota, Louisiana and Delaware are leading campaigns to urge their senators not to be the last Democrat to come out in support of marriage equality. Only eight Democratic senators have yet to support the freedom to marry for all couples.

Yesterday, Pennsylvania Senator Bob Casey announced his support for marriage equality after more than 12,000 MoveOn.org members signed a petition to him (see http://signon.org/sign/tell-sen-casey-to-support).

Now, MoveOn members who are constituents of the remaining 8 Democratic senators are running campaigns to persuade those senators to support equality:

To view all of the 8 petitions go to: http://bit.ly/last8dems