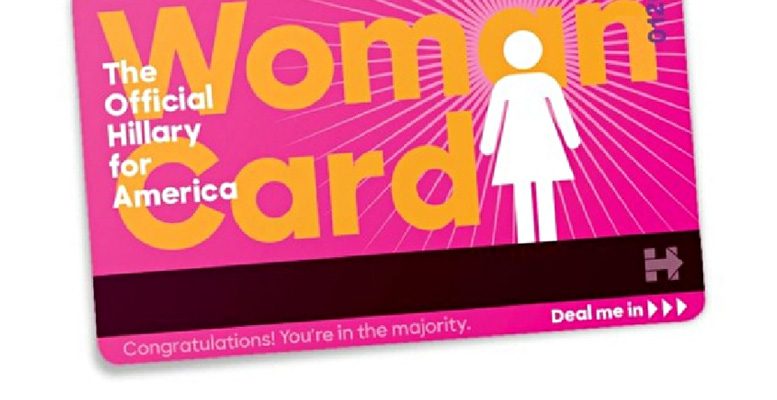 “Frankly, if Hillary Clinton were a man, I don’t think she’d get 5 percent of the vote,” said Republican Presidential candidate Donald J. Trump in a speech on April 26 after winning 5 Republican primaries that night. “The only thing she’s got going is the woman’s card.”

I suppose that is the only way the Republican frontrunner can justify in his misogynistic mind that she has earned millions more votes than him, has out performed him intellectually and politically and certainly has the public in her favor when going head-to-head with Trump in a general election. There’s no doubt that Trump is terrified of losing, albeit his façade. He should be. However, stunts and grossly ignorant comments like the “woman card” one, won’t earn him points with the general public, a general public where at least in numbers, women are the majority. The bottom line is that Trump is scared of being trumped, and much more so by a woman.

As a proud woman card carrier, I have undoubtedly been awarded a myriad of privileges when compared to my male counterparts—at least according to Trump’s assertions. How asinine.

Women have had the “fortune” to pay more for personal hygiene products than men, earn less pay for equal work, and our bodies and reproductive rights are legislated against by a mostly male Congress. Comparably, on average, women are frequently overlooked for job promotions, even when it is deserved, leading to only 5 percent of women at the helm of major corporations. In hetero-normative homes, women still shoulder most of the burden when it comes to childrearing and household responsibilities, even when they work the same number of hours outside the home as their male partner.

Most victims of human trafficking, rape, molestation, female genital mutilation, domestic violence, brainwashing and sexual harassment are women. Likewise, more women live in poverty than men and retired women are twice as likely to live in poverty when compared to retired men. Even pertaining to televised, print and online media, men represent the majority of anchors, reporters, editors and publishers. Whose story are we telling anyway?

It is far more likely that if Donald Trump were a woman, he wouldn’t even get “5 percent of the vote,” nor would he be in the privileged place he finds himself today.

According to the National Coalition Against Violence, every 9 seconds in the US, a woman is assaulted or beaten.

According to the Pew Research Center, women that work in the U.S. still earn just 84 percent of what their male counterparts earn and worldwide, make only 77 percent paid to men, read a report authored by the United Nation’s International Labor Organization. Imagine this—Women of Color would have to work a minimum of 19 months to earn what a white male does in just 1 year or twelve months, found the National Women’s Law Center (NLWC).

And the staggering stats continue as described by the NLWC. Some of them are listed as follows:

And, this is just the beginning of the benefits you too can reap from being a carrier of the woman card. I have a feeling Trump won’t be signing up for one any time soon. A complete list of stats compiled by the National Women’s Law Center can be found here.

*Nicole Lashomb holds an MBA from Marylhurst University and a BM from the Crane School of Music at SUNY Potsdam. She can be reached at editor@therainbowtimesmass.com.