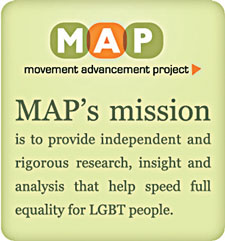 BOSTON, Mass.—A new report by the LGBT Movement Advancement Project (MAP) paints a picture of the employment scene for transgender people. Based on data from last year’s National Transgender Discrimination Survey, as well as other studies, “A Broken Bargain for Transgender Workers” outlines the numerous challenges transgender people face in employment and proposes recommendations for change.

“The report and survey results make clear that there is a lot of work to do in order to level the playing field for transgender workers and that putting protections in place would benefit everyone, but that alone is not enough,” said Zack Paakkonen, an attorney for Gay & Lesbian Advocates & Defenders’ (GLAD) Transgender Rights Project. [pullquote]“A Broken Bargain” draws attention to the fact that certain trans populations—especially trans women and people of color—face greater challenges.[/pullquote]

The “bargain” the report refers to is that “those who work hard and meet their responsibilities should be able to get ahead” and “that workers will be judged and rewarded based on their contributions and capabilities.” The report notes that this “bargain” is more than an ideal. It’s backed by laws protecting some workers from discrimination, but which don’t address gender identity. The report identifies two problem areas: difficulty finding and keeping good jobs due to discrimination and inequities in wages and health benefits.

“Transgender workers often simply don’t have the same access to health coverage as non-transgender workers and often face exclusions in what coverage they have for such things as doctor’s visits, mental health counseling and medical leave,” said Paakkonen. “This means that transgender workers have to cover these sorts of costs out of pocket, increasing their financial burden. Even when transgender individuals do have the ability to seek medical treatment, they often face discrimination when accessing health services, which may lead some people to avoid medical care altogether.”

“A Broken Bargain” draws attention to the fact that certain trans populations—especially trans women and people of color—face greater challenges.

“The report shows that trans women are vastly unemployed and underemployed, even though as a group they have higher education levels than the general population,” said Genny Beemyn, author of The Lives of Transgender People and director of the Stonewall Center at the University of Massachusetts-Amherst.

Yusef Bornacelli, a 22-year-old Venezuelan who moved to western Mass. from Miami, faces multiples biases as a trans man of color.

“Trans people are treated as being deceptive,” said Bornacelli. “Trans men and cisgender men of color also have to deal with being vilified more often. There’s an image of ‘the angry black or brown man’ that everyone is familiar with. It’s a perfect formula for unemployment without questioning the [hiring] decision.”

“When I was Lambda Legal’s national transgender rights attorney from 2005 through 2009, more transgender people called us with employment discrimination problems than any other issue,” said Cole Thaler, a Northeastern University Law graduate. “These were people who came out as transgender and got fired, or who were harassed by a coworker because of their gender expression, but that flood of people did not include the much greater number who couldn’t pinpoint a single bad actor or source of discrimination, like people who went on countless interviews but never got hired after their employer saw that their identity documents didn’t match their gender expression, and people who resigned themselves to health insurance policies that exclude transition-related care because those policies are still the norm.”

“Trans students often don’t have the luxury of making the decision of whether to be out if they are genderqueer,” said Beemyn. “Genderqueer people are very much trying to blur gender boundaries and live outside of gender boundaries, so they are not trying to be stealth at all. They often experience the most discrimination because they are very visible and don’t want to be invisible.” [pullquote]“It’s a Catch-22 that a lot of trans women—and some trans men—can’t be stealth if they want to be, because they cannot afford to get on hormones or have surgery that would alter their appearance,” Beemyn said.[/pullquote]

Bias in hiring combined with obstacles to health coverage creates a vicious cycle for some, according to Beemyn.

“It’s a Catch-22 that a lot of trans women—and some trans men—can’t be stealth if they want to be, because they cannot afford to get on hormones or have surgery that would alter their appearance,” Beemyn said. “They can’t do that because they don’t have the job and the income to make that happen.”

According to Thaler, more than legal changes are needed before a positive work experience is the norm for transgender people.

“It’s impossible to sue an entire social structure that makes it acceptable to shun gender nonconforming people,” Thaler said. “Discriminatory employers rarely admit that they think transgender employees will make others uncomfortable or will cause problems in the bathroom.  Instead, they will find some other reason not to hire a transgender applicant, so transgender job seekers are too often shut out of the job market completely, or underemployed with no legal recourse and no option except poverty.”

The LGBT MAP report, “A Broken Bargain for Transgender Workers,” is available as a free download at http://tiny.cc/35tv3w.