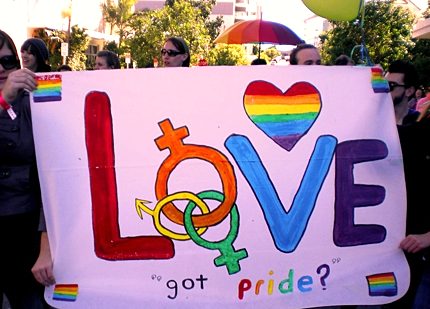 Gay Pride Month was June, but the party doesn’t end there. So let’s hoist the rainbow flag, drink a toast (with the alcohol of a gay-friendly sponsor) and honor the LGBT athletes who make us proud.

The biggest—physically, anyway—is Jason Collins. The NBA player made us proud when he came out as the first active male pro sport athlete. Dozens of former teammates—and many opponents—made us proud when they tweeted sincere messages of congratulations the moment the news broke. The Brooklyn Nets made us proud when they signed him to a 10-day contract – not because he was gay, but because they needed a strong, experienced veteran to bring maturity to their locker room. Then the Nets liked him so much, they extended his contract. And NBA fans made us proud by making Jason Collins’ souvenir jersey the best-selling one in all of sports. Let’s go Nets!

Another big story—physically too—is Michael Sam. The University of Missouri star made us proud by coming out publicly a month before the NFL draft. (He’d been out to his team for a long time; they and their coaches made us proud by supporting him strongly, en route to a kick-ass season.) Mizzou fans made us proud (and shattered East and West Coast stereotypes) with their fervent embrace of him. ESPN made us proud by showing him kissing his boyfriend after Sam’s name was called in the draft. And Sam made us very, very proud with that kiss.  It—and his tears of joy—were the exact same reactions as all the other macho, straight NFL draftees have. We are proud that all of America saw it.

Robbie Rogers made us proud when he came out, soon after retiring from Major League Soccer. (He had a drink of water with the national team too.) He made us even prouder when he returned to the sport, signing with the Los Angeles Galaxy. And soccer fans around North America—particularly those in the Cascadia region of Portland, Seattle and Vancouver – have made us tremendously proud by their heartfelt, vocal and very clever signs of support not just of Rogers, but of the entire “You Can Play”/gays-in sport movement. It takes a village—or, more appropriately, an entire stadium. And MLS has ’em. [pullquote] They don’t get nearly as much attention as the Jason Collinses, Michael Sams and Robbie Rogerses. But they are our true, and very prideful, champions. [/pullquote]

We were proud when English Olympic diver Tom Daley came out – except, some of us were not proud because he didn’t exactly come out. He said, “Right now I’m dating a guy, and I couldn’t be happier.” Then he said, “Of course I still fancy girls.” Of course, there’s nothing wrong with being bisexual—but Daley didn’t use the “B” word either. (Eventually we learned that the “guy” is Dustin Lance Black.) Some members of the LGBT community are proud to have a top-level athlete like Daley in our midst. Others wish he’d embrace his sexuality more fully. Still others point to his non-disclosure disclosure as a sign that times are changing for the better. Labels don’t matter, they say; just be proud of who you are.

We are proud of Brittney Griner, for sure. One of the greatest women’s basketball players of all time plays on our team. But while part of us is very proud of her talent, her competitiveness and her honesty, another part is not proud at the way female athletes are marginalized. Her coming-out announcement should have been huge news, on par with those of Jason Collins, Michael Sam and Robbie Rogers. In her sport, she’s even bigger than they are. But it wasn’t. We’re not proud that female athletes—and lesbians—still have a long way to go.

We are not proud that the Winter Olympics were held in Sochi. Russia’s gay rights record is abysmal, and President Vladimir Putin didn’t even pretend to whitewash it. Instead, he warned gay visitors not to spread “gay propaganda.” We were not proud that governments and Olympic committees around the world did not raise more of a protest. We were not proud that none of the athletes—or their allies—raised a rainbow flag in protest. On the other hand, we should probably be proud that the Russians did not arrest, intimidate or even harass any LGBT folks. Small victories and all that.

But that was winter. Pride is still busting out all over. Yet with all we have to be proud of, the most Pride-worthy folks are the men and women—and boys and girls—who are out and proud, as college and high school athletes. They don’t get nearly as much attention as the Jason Collinses, Michael Sams and Robbie Rogerses. But they are our true, and very prideful, champions.