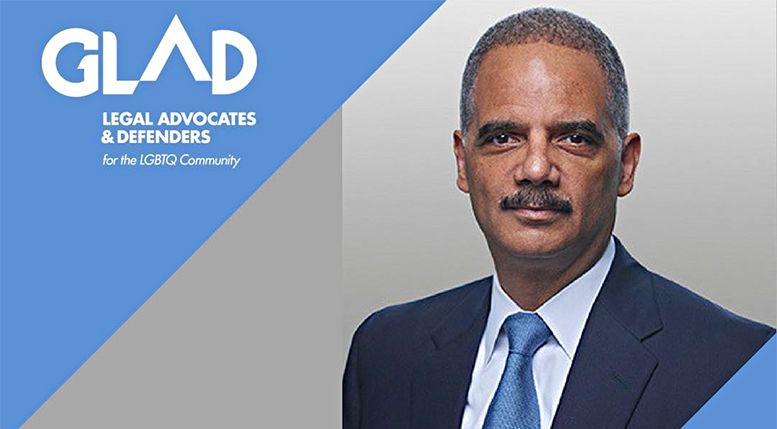 “Former Attorney General Holder is an inspiring role model and a passionate advocate for LGBTQ rights, racial justice, and the rights of all marginalized people,” said Mary Bonauto, GLAD’s Civil Rights Project Director. “Following a remarkable tenure at the Department of Justice, he continues to be one of our nation’s strongest voices of resistance against attempts to roll back progress on civil rights.”

“Mr. Holder’s leadership on a wide range of civil rights matters – from voting rights, to criminal justice reform and examining racial bias in policing, to marriage equality and transgender rights – have made our country a better, more just place,” added Janson Wu, GLAD’s Executive Director. “We’re extremely proud to honor him and his legacy.”

While heading up the Department of Justice (DOJ) from 2009-2015, Holder undertook several significant initiatives to secure protections and expand equality for LGBTQ people in the United States. He was instrumental in moving the administration to fully support marriage equality – from recommending and implementing the government’s decision to stop defending the Defense of Marriage Act (DOMA); to directing the development of comprehensive federal guidelines for fair treatment of same-sex married couples after DOMA was overturned; to directing the Administration’s brief in Obergefell v. Hodges asserting that state marriage bans violated the equal protection promised by the Constitution. Holder ensured the DOJ took seriously anti-LGBTQ hate crimes following the enactment of the Shephard/Byrd Hate Crimes Act, and, following the landmark 2012 Macy ruling at the Equal Employment Opportunity Commission, affirmed the Administration’s position that Title VII of the Civil Rights Act prohibits employment discrimination based on gender identity or expression.

The third-longest serving Attorney General in U.S. history and the first African American to hold that office, Holder is an internationally recognized leader across a broad range of regulatory enforcement, criminal justice, and national security issues.

As a Columbia University Law Student, Holder, the son of an immigrant father, interned at the NAACP Legal Defense Fund. His first job out of law school was with the DOJ, and early in his career he was a vocal proponent of the Shephard/Byrne Hate Crimes Act, arguing that existing laws placed major constraints on the ability of federal investigators and lawyers to successfully prosecute cases. At the DOJ, he also served as the Deputy Attorney General under President Clinton, and as the head of the Civil Rights Division under President Obama.

Holder is currently a partner in the D.C.-based law firm of Covington & Burling LLP, where he was also a partner before serving in the Obama administration.

Eric Holder will accept the award at the 18th Annual Spirit of Justice Award Dinner at the Boston Marriott Copley Place on Friday, October 27, 2017. Details about the event are available at www.glad.org/events.

The Spirit of Justice Award Dinner is co-chaired by Fred Csibi and Liz Doherty.