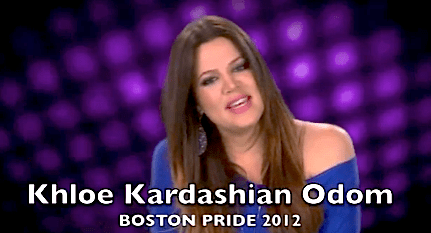 BOSTON, Mass.—Boston is first when it comes to many things in the country, especially with regards to civil rights for the LGBT community. On Pride Day, as the LGBT community and allies celebrated Boston Pride 2012 at Faneuil Hall (even as it rained), TRT sat down with Boston Pride to find out more about the “surprise” YouTube videos from celebrities that the organization is receiving.

What we were not aware of at the time, was the continuance of celebrity wishes would go beyond June 10th. With new celebrities, now we know that Sharon Needles and Kat Graham had also sent their messages to Boston Pride. Will there be more? Stay tuned.

All of the messages wish Boston Pride 42 and its attendees a Happy Pride. Other celebrities speak more candidly about gay rights, etc.

Thomas Roberts from MSNBC said from the studio “…wish you a Happy Pride, this is certainly a month to reflect and be proud … I ask you to think about the powerful words about the American modern-day scholar RuPaul ‘If you can’t love yourself, then how the heck can you love someone else … can I get an Amen?” The rest of the studio responds “Amen!”

Boston Pride’s Celebrity videos are a fairly new concept developed by the one member from the Boston Pride Entertainment Committee.

“Last year I was trying to get Lady Gaga to come up here, but she wasn’t available,” said Lou from the entertainment committee (who requested his last name to remain anonymous). “In turn, she did a video. So, this year I decided to do one for each day, from June 1-10. I came up with the idea.

“There were celebrities that you would’ve thought would say yes, that didn’t, but for the most part everyone’s wanted to do them [the videos],” he said.

It was not an easy task at first, and while working with this new concept, Lou also took it upon himself to land the booking for Rye Rye, Kerli, and Alexis Jordan all of whom will perform at Boston Pride 2012.

“Lou has been a great asset to the entertainment committee this year,” said Linda DeMarco, President, Boston Pride. “He took the lead with the headliners and Lucky Belcamino with the local entertainers. She will also be the stage manager of the Festival.”

According to DeMarco, there is yet another surprise at the Festival around 3:15 p.m. This surprise is the kind of surprise that “you don’t want anyone telling you about it, but you must be there to see it,” DeMarco said.

“We hope everyone enjoys it,” she said. “You really don’t want to miss it!”

The Rainbow Times, TRT, will continue to have photo, video and story coverage of Boston Pride 2012, as its main media partner and official Pride Guide producer. Please don’t forget to check out the Official 2012 Boston Pride Guide, produced in its entirety by TRT.