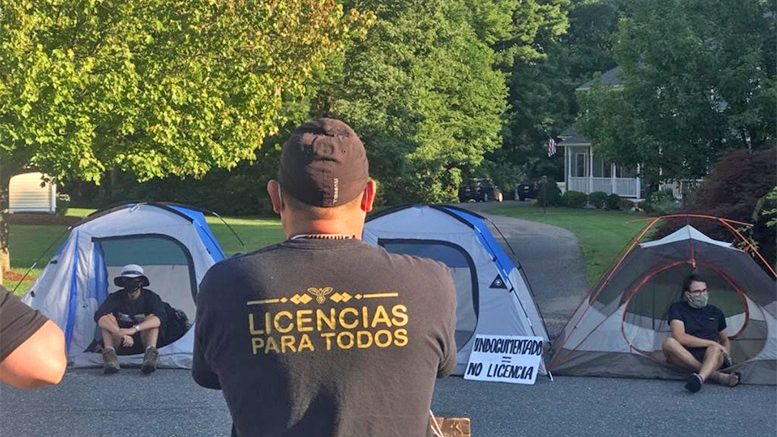 BOSTON—After the amendment to grant driving licenses to immigrants was pulled out of the Economic Development Bond Bill, immigrant leaders who’d started an encampment that lasted over 11 days were left enraged, according to a press release from community members and allies.

While the State House is closed to the public, immigrant leaders and activists had no choice but to take their pain to the homes of key legislators. 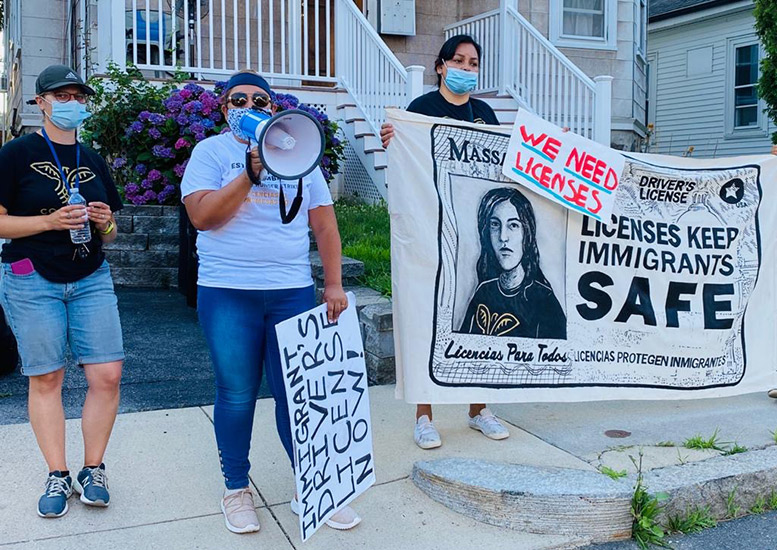 For the past eleven days, community members have been camping in front of the Massachusetts State House, through sweltering heat and pouring rain, to draw attention to Amendment #261 and the opportunity it would have provided to immigrants to drive without fear.

On Monday, the lead sponsors of Amendment #261, Representative Tricia Farley-Bouvier, and Representative Christine Barber went to the encampment and told immigrant leaders that organized opposition in the House prompted the last-minute removal of the amendment.

Consequently, activist immigrants and allies decided to visit the homes of Senate President Spilka and Speaker of the House DeLeo to bring their demands directly to their elected officials. They will be gathering early in front of DeLeo’s home in Winthrop and Spilka’s home in Ashland, seeking to gain the attention of the officials.

“They have deceived us,” said Martinez. “They have been indifferent to our presence. I feel they have played us emotionally, giving us false hopes and believing we have their support but in the last moment they say it’s not going to happen.”

Driver’s licenses, they said, are necessary to meet everyday tasks and to carry on particular responsibilities, the release explained. Taking their demands to the legislators’ houses is the next step in their quest to be heard, to count.

“Many of my friends and students are deeply affected by not being able to apply for driver’s licenses,” said BPS teacher and activist Eric Fishman. “I’m showing up early at Speaker DeLeo’s house because he needs to hear from his constituents how important this is. DeLeo’s office is closed for the pandemic and he hasn’t even deigned to visit Cosecha’s 11-day encampment at the State House—so we brought the encampment to him.”

Fifteen years of false promises continue to cause pain to the immigrant community, as stated in their release. Even while neighboring states have successfully implemented universal licensing, the MA legislature continues to ask immigrants to wait, while driving without a license remains one of the top ways immigrants enter the detention and deportation system.

While the Work and Family Mobility Act remains a possible path forward for the immigrant community’s bid for licenses, this amendment to the economic bill would have been a more direct and immediate solution for this time of crisis, when many immigrant essential workers can’t get to their jobs for fear of getting pulled over and being exposed to COVID in detention.

Martinez said: “After eleven days of the encampment the Senator and Speaker want to demoralize us, but our community needs to understand this gives us more to fight for.”