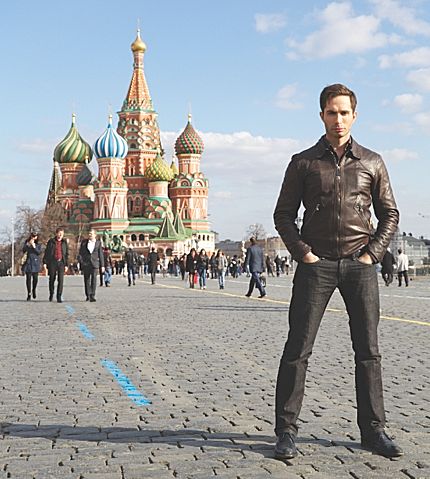 In New Documentary, Campaign of Hate: Russia and Gay Propaganda

By: Mike Bahr*/Special to TRT—

As most of the world moves forward toward gay equality, Russia is seemingly heading backward. Antigay sentiment and legislation are spreading rapidly throughout the country. The Kremlin has chosen the LGBT community as its scapegoat in a populist campaign against supposedly decadent “Western” values, and there are ominous signs of much worse to come. Violent attacks against Russian gays are more and more common. Videos of young LGBT people being taunted and tortured have been widely distributed on the Internet. Nearly any public discussion of gay equality is a crime.

In his new documentary, Campaign of Hate: Russia and Gay Propaganda, Michael Lucas shines a light on Russia’s homophobic state of affairs and law against “gay propaganda.” Sobering accounts from LGBT Russians and their families and not-so-fun-facts about the Kremlin’s long-term, intensifying atmosphere of hate make this a compelling watch and call to arms.

Mike Bahr: Why was it important for you to make THE CAMPAIGN OF HATE?

Michael Lucas: Ever since my years as a confused gay child in the former Soviet Union, it has been my dream to show the world what it is like to belong to the LGBT community in my former homeland. The recent explosion of antigay legislation and violence there has made this a more urgent project than ever. There was a lot of attention to this issue prior to the Olympics, and that attention must continue. The world has seen bits and pieces, but we don’t have the full picture of what the LGBT community in Russia is going through. That’s what I hope to show in my film.

Q. Growing up in Russia, what was it like to realize that you were gay?

A. It was very confusing at first, because there was no sexual education in school—not even for heterosexuals. I had no idea why I was attracted to guys, but I always knew that I was different from most of the other boys. At the age of 15 or 16, I looked up “homosexual” in a Russian encyclopedia, and saw that the term was associated with evil. Gays were classified as perverts, and gay sex was a criminal act that could land you in jail for up to three years. It was a traumatizing to read. But some time later, I read in a Soviet newspaper that homosexuals were supposedly being glorified in the West. The article was written in a negative way, of course, but it wound up giving me hope. I realized then that there were many places in the world where being gay was not such a terrible thing. From then on, I dreamed of leaving Russia.

Q. Were you able to come out to your family or friends?

A. After reading that article about homosexuality in the West, I did come out to my family and some friends. I was the only openly gay teenager at my university. I was proud and confrontational.

Q. Was it dangerous to be open about your homosexuality?

A. If you talk about your LGBT identity openly, or display same-sex affection in public, you are at risk of being targeted by gangs, beaten up and sometimes thrown in jail for a while. The police are not sympathetic to gay victims. There can also be a fine involved, because public affection with a person of the same sex can, according to the new laws in place, be considered “gay propaganda” and a menace to children.

Q. How did you choose the people profiled in THE CAMPAIGN OF HATE?

A. We found them through various channels: Facebook profiles, word of mouth, and connections through friends in Russia.

Q. Which story in the film speaks most to you?

I had a different reaction for every story. I was disgusted by the ignorance and hatred expressed by many of the random Russian people that we interviewed in the streets. But I continue to be amazed and inspired by the intelligence and bravery of journalist and activist Masha Gessen.

Q. What challenges do to the children being raised by gays and lesbians in Russia face?

A. It’s very difficult for kids. They are often harassed and bullied at school. More importantly, they also live under the constant danger that they could be taken away from their parents. Under the new law, gay parents are theoretically exposing their children to “gay propaganda” every day. That’s why Masha Gessen and her partner recently moved to New York City. They were afraid they would lose their children if they stayed in Russia, and they were right to be.

Q. Where can Russian gays and lesbians go?  Is there a safe haven?

A. As Masha says: “To the airport.” Those who do not have the means to leave are increasingly at risk.

Q. Where does the hate stem from?

A. The Russian government is looking for a new enemy to distract its people from real problems like corruption and unemployment. The scapegoats used to be the Jews, but most of them left after the collapse of the Soviet Union. And so the Russians have moved on to the LGBT community, which coincides well with Putin’s cynical campaign of Russian nationalism. Homosexuality, according to this line of attack, is a sign of “Western decadence” and an enemy of “traditional Russian values.”

Q. Do you still have family in Russia?

A. No. Like most Jews from the former Soviet Union, all of my relatives are in the United States or Israel.

Q. What can Americans do to stop the campaign of hate in Russia?

A. We must do everything we can to keep these issues in the public eye and to pressure our government to do as little business with Russia as possible. We need to pinch their pockets.

Q. Do you have any hope that public opinion towards homosexuality will one day change in Russia?
A. In the long run, I hope that Russia will join the rest of the developed world in changing its attitudes toward LGBT rights. But I am a practical person, and I don’t see that happening in the near future. For now, it’s only getting worse.

Q. Do you expect another cold war between the USA and Russia?

A. Judging by the latest developments in the Ukraine, absolutely. The civilized, tolerant values of the West are at odds with the increasingly backward and barbaric attitudes of modern Russia, which is really a throwback to the worst parts of the Soviet era. The campaign against LGBT people there is a symptom of a larger disease that is certain to keep spreading.

Michael Lucas’ “Campaign of Hate: Russia and Gay Propaganda” is available on DVD at Amazon.com ($17.99).