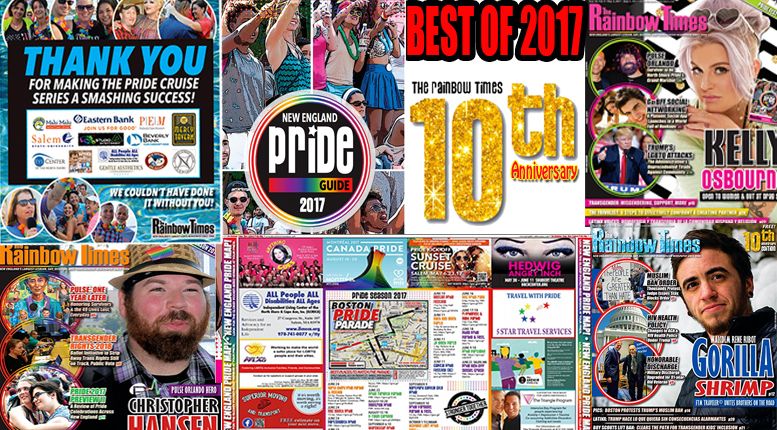 Award winning, The Rainbow Times presents you the best of 2017 and what we covered for our readers

The year 2017 highlighted the coming together of organizations to work locally to provide the necessary protections needed for LGBTQ people in Massachusetts, New England and the country as orders from the White House continued to launch a hateful campaigns against members of marginalized communities—based on religion, immigration status, gender, sexual orientation and gender identity, race and ethnicity.

Rising up to counter such vitriol, non-profit organizations forged ahead, and expanded services specifically addressing concerns and needs of the LGBTQ community and the various intersectionalities within it.

Anti-minority messages were seen in more public venues than ever before in modern history. As Trump emboldened deplorables to act, thousands more fought his executive orders. Though hundreds of anti-LGBTQ laws continue to surface aimed at taking away LGBTQ rights leading into the New Year, of most concern in 2017 was the Transgender Military Ban—a direct stroke from Trumps’ pen as a directive to prevent brave trans men and women from serving and dying for their country. The Rainbow Times reported heavily on this story as it continued and continues to unfold.

The Rainbow Times reporters proudly covered these events and more in exclusive and breaking news stories that quickly developed from confidential news tips or releases that turned into unmatched exclusive coverage. Below are some of the articles that were produced in-house. These represent our most memorable coverage in 2017, and it’s not solely editorial picks, but mostly based on feedback and social media shares too.

FADA Could Impede Civil Rights of LGBTQ People Across the Nation … By: Mike Givens

LGBTQs & Allies Take On the Cold to Battle Trump Admin … By: Al Gentile

May 2017 (See New England Pride Guide For More, Below)

Ballot Initiative to Strip Away Trans Rights Still on Track to be Voted on in 2018 … By: Jenna Spinelle

Breaking Down Bisexuality: Understanding the Most Prevalent Sexual Identity Under the LGBTQ+ Umbrella, Part I … By: Mike Givens

Breaking Down Bisexuality: Understanding the Most Prevalent Sexual Identity Under the LGBTQ+ Umbrella, Part II … By: Mike Givens

Violence in Charlottesville Shines Light on Hate, Bigotry in America … By: Jenna Spinelle

Beyond the Chatter: Polyamorists Talk About Their Experiences, Fears and Philosophies … By: Al Gentile

As Boston’s Second Saturdays Comes to a Close, Impact and Memories Live On … By: Al Gentile

First Ever LGBTQ Artists of Color FestivalKicks Off in Boston’s Hibernian Hall … By: Mike Givens

Queer and Caribbean: LGBTQ+ Culture and the Island Identity … By: Mike Givens

Sanctuary for Peace: The Will of the People vs. The Arrogance of Ignorance … By: Nicole Lashomb

Op-Ed: Learning From History; How Marriage Equality was Won Across the Nation … By: Keegan O’Brien

Grappling With God: The Never-Ending Struggle to Make Sense of the Senseless and Believing … By: Mike Givens

Society Must Come to Terms With Bisexual Male Identity … By: Jason Graves

Our Story, My Identity, the Wife of a Trans Man … By: Nicole Lashomb

Trump Fails Again: A Despicable Response to PR; How the U.S. Cripples the Island … By: Nicole Lashomb

Endorsement: When It Comes to Salem, No One Beats Kim Driscoll … By: Editorial Team

Defiance: Living Your Life As An Openly Trans Person Is A Revolutionary Act … By: Lorelei Erisis

Perils Of WhiteWashing: The Importance Of Nuanced Dialogue In the Aftermath of Pulse, 1 Year later … By: Javier Fernandez

Violence Against Transgender Women of Color on the Rise … By: Jenna Spinelle

Ten Misconceptions Around Sex As Told By Several Advocates … By: Al Gentile

Pride Season Is Upon Us, But Whose Pride Is It? … By: Lorelei Erisis

*The Rainbow Times (TRT) is New England’s Largest LGBTQ newspaper and Pride Projects Producer. TRT has been in business for 10 years and has received numerous awards for its coverage from various Massachusetts (Boston, Cambridge, Salem, and others) locations. TRT’s ownership and team is composed of members of the L-G-B and T and Allied communities and is also representative of more than one race and ethnicity, gender identity and expression, and sexual orientation. The Rainbow Times’ philanthropic work will be published online in 2018.